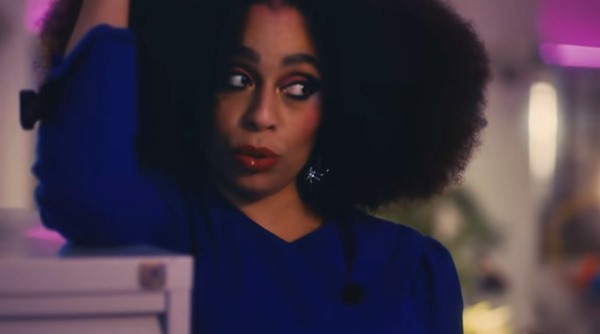 British singer songwriter Celeste’s ‘Love is Back‘ was played on New Amsterdam, Season 4, Episode 2, “We’re in This Together“.

The song was the fourth single from the already massively successful singer’s debut studio album Not Your Muse, and charted in the UK, the Netherlands and Belgium.


It is a mellow, soul track with a gentle beat and a sweet melody, but what makes it stand out are Celeste’s gorgeously husky and sultry vocals. Vocals reminiscent of iconic singers like Amy Winehouse.

Her album Not Your Muse was long-awaited by fans, as Celeste had already had several major single hits. When released, the album debuted at #1 on the UK Albums Chart.

A big deal, not only for the album, but also as it was the first #1 debut by a female singer on that chart in more than half a decade. Crazy, eh?

Not Your Muse, which was full of tracks as gorgeous as Celeste’s ‘Love is Back‘ was also critically acclaimed from just about every entertainment outlet, including The Line of Best Fit, All Music, The Independent and NME.

Listen to Celeste’s ‘Love Is Back‘ in the song’s official music video, which features the singer in an office full of co-workers singing about her boredom over love, until she explains she met a man who made her realize “yes, love is back, and isn’t a wonderful thing”.

And don’t miss her Not My Muse album, which features the gorgeous song, and which you can listen to in its entirely on its Deluxe Edition below.