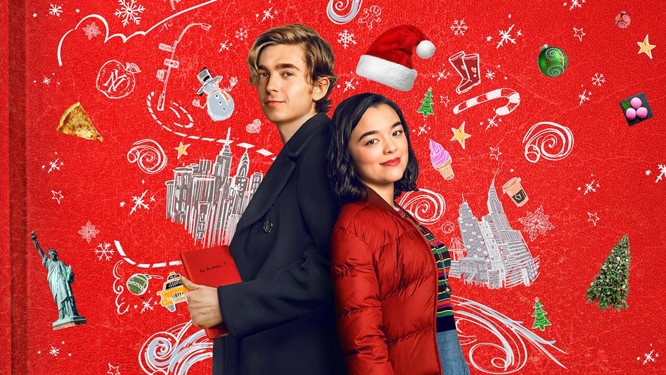 Dash & Lily, the new Netflix rom-com, is not only one of the most fun Christmas-themed shows the streaming service has released in eons, it also has some of the coolest and quirkiest Christmas music.

That track was played on the episode as Dash finds the clues in the notebook, and is a song Chuck Berry originally released more than 60 years ago.

This year, however, ‘Run Rudolph Run’ finally got an animated Christmas-themed music video. The first official music video the song has ever received.

The video was created by Fantoons and has an animated version of Chuck Berry playing an electric guitar while flying around in a convertible dressed up to look like Santa’s sleigh, and pulled by reindeer.

As the song plays, Chuck flies round his home town of St. Louis delivering toys and shows off some of the city’s most well-known spots while he does it.

Chuck Berry’s ‘Run Rudolph Run‘ was written by Johnny Marks and Marvin Brodie.  (Marks, by the way, also wrote ‘Rudolph the Red-Nosed Reindeer‘, so he definitely knew his Christmas music).

The song was first released by Berry as a single in 1958 and made it high onto the Billboard Hot 100 chart. It charted again five years later in the United Kingdom.

‘Run Rudolph Run‘ has since become a favorite with TV show music supervisors who have used it on the soundtracks of series like Prince of Bel-Air, New Girl, That 70s Show and NCIS: Los Angeles.

You also may recognize it from the soundtrack of the hit 1990 movie Home Alone.

Listen to Chuck Berry’s ‘Run Rudolph Run‘ as played on Dash & Lily in that new animated video below. It really is so very cool.

Every episode of Dash & Lily is now streaming on Netflix.