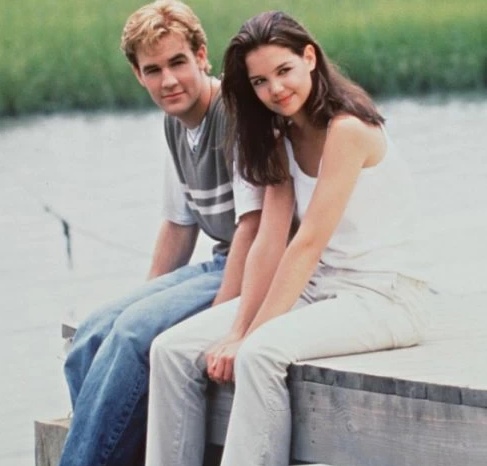 Chumbawamba’s ‘Tubthumping‘ was one of the truly superb plethora of songs that were featured on the first episode of the teen drama Dawson’s Creek. A drama series that finally releases on Netflix tomorrow (November 1st, 2020) — Dawson’s Creek, Season 1, Episode 1, “Pilot“.

The song played during the scenes at the local high school as Jen arrives for her first day.

Chumbawamba’s ‘Tubthumping‘ is a truly iconic dance-rock song anyone into music in the late 1990s will definitely remember.

The track was the almost-title track from the British rock band’s 12-track eighth studio album Tubthumper, which was released in 1997 via the EMI label.

The song became a massive hit for Chumbawamba, peaking at #2 on the British Singles chart, but also making it onto the charts in 20 countries in total and hitting the #1 spot in Australia, Canada (on three charts), Ireland, Italy, New Zealand, Scotland and the U.S. (on three charts).

It has sold almost 1 million copies in the United Kingdom since and, to this day, is the track Chumbawamba is mostly recognized for.

According to the band’s guitarist, Boff Whaley, he said they wrote the song to point out the resilience of ordinary people, and how anyone could get through anything if they only believed they could. (article continues below…)

The spoken opening lines from the song, “Truth is, I thought it mattered. I thought that music mattered. But does it bollocks. Not compared to how people matter” are from the iconic 1996 British movie Brassed Off.

A film about the miners’ strikes in the UK and how British miners were absolutely screwed by the government of then-Prime Minister Margaret Thatcher.

Chumbawamba themselves stayed together as a band for over 30 years before finally disbanding in 2012.

Listen to Chumbawamba’s ‘Tubthumping‘ from Dawson’s Creek in the video below and in the Spotify player. I will guarantee, once you have, this upbeat song will be bouncing around in your head for days to come.