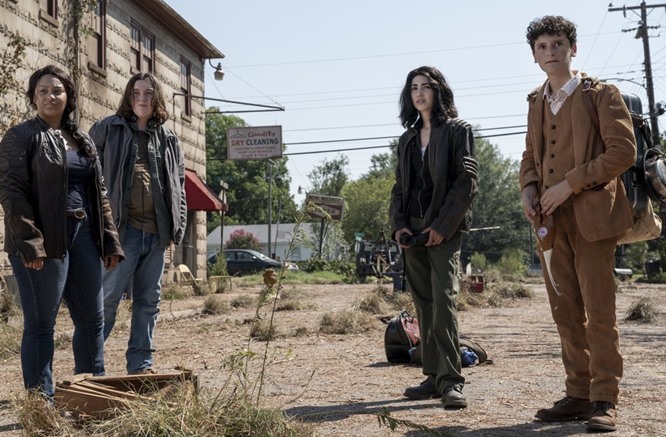 The rocking track (listen below) was played as Silas’s father is playing music on the boombox and reminiscing about the way rock concerts used to be before the world went to hell.

The heavy metal band themselves has been in existence since the mid-1980s, when it was founded by guitarist Glen Cunningham, drummer Neal Busby and singer Rob Villemaire. Bass player Pete Dove joined them a little later on.

The band was initially together for just over a year in the mid-1980s and then disbanded. Over 25 years later, they got back together in 2012 and have been together and creating new music ever since. (article continues below…)

Listen to PLEASE’s ‘Fairytale (Remastered)’ from The Walking Dead: World Beyond, Season 1, Ep. 8

Listen to Chyld’s ‘Lite the Nite‘ as played on The Walking Dead: World Beyond in both the Spotify player and video below.

The spin-off to The Walking Dead, The Walking Dead: The World Beyond, and one that, sadly, is not very good (the acting is terrible — but, hey, at least the music is good), is coming to the end of its first season on AMC.

A second and last season will air some time in 2021.