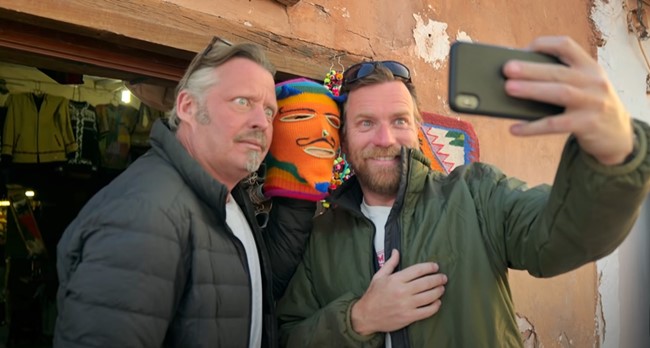 English indie rock band Circa Waves ‘Motorcade‘ was featured on the new episode of the road-trip series Long Way Up this week — Long Way Up, Season 1, Episode 5, “Atacama Desert“.

The track was heard during the ‘ginger climb’, as Charley and Ewan are climbing through the Andes to the Chilean border.


Circa Waves ‘Motorcade‘ is from their 2019 studio album What’s It Like Over There?, released via PIAS Recordings. An album that is far more subtle music-wise than its predecessors, with more of a concentration on a strong pop melody than on their previous huge guitars and heavier rock beat.

To some critics, that made the album feel bland and uninteresting, whereas others did enjoy some of the tracks on it, including Circa Waves’ ‘Motorcade‘.

Regardless of the critics’ response What’s It Like Over There? still did quite well in the UK, however, making it to the #3 spot on the Scottish Albums chart and #4 on the UK Albums chart.

For me, Circa Waves’ ‘Motorcade‘ was a stand-out from the album as its melody and subtle beat sticks with you long after it has finished playing.

Easy to understand then why it was chosen to accompany Charley and Ewan on part of their Long Way Up adventure as it really is the perfect road-trip music. (Article continued below)

Listen to Jon Batiste’s ‘What a Wonderful World’ from The Boys, Season 2, Episode 7 opening

Long Way Up, of course, is the long-awaited follow up to the pair’s previous TV series — the 2004 Long Way Round and 2007 Long Way Down — with a more than 100-day trip this time through Latin America to Los Angeles.

Luckily for them, the trip was planned and ridden during late 2019 and not in the panic-over-Covid insanity of 2020.

Sadly for most, however, Long Way Up is only available on Apple TV+, so will be missed by many of the fans that have been waiting for it to arrive. (Apple TV+ itself is doing poorly compared to its competitors due to only being available on Apple devices, so it will be interesting to see how well Long Way Up actually does).

Listen to Circa Waves’ ‘Motorcade’ from Long Way Up and, if you are interested to see what you can expect with Long Way Up, or what you’re missing, check out the trailer for the new series below.