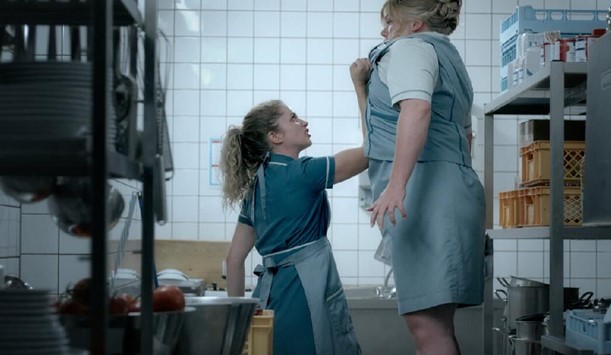 English pop band Cutting Crew’s ‘(I Just) Died in Your Arms’ was one of a few iconic songs that showed up on the new Netflix film Freaks — You’re One of Us — this week.

The song was played as Wendy walks to the dumpster and is then confronted by the tramp Marek (Wotan Wilke Möhring). It continues playing as she talks to him and then as she begins to make her way home.

Cutting Crew’s ‘(I Just) Died in Your Arms‘ was released in 1986 as the first single from the British band’s debut studio album Broadcast.

The song went on to become an enormous hit for the pop rock band, charting in the top spot in the U.S., Finland and Canada, and making the charts in 13 other countries.

The track was re-released earlier this year in a number of new versions — including a gorgeous orchestral version. The releases were part of Cutting Crew’s new album Ransomed Healed Restored Forgiven — an album featuring a slew of popular Cutting Crew songs, but recorded in a different way.

Interestingly, the title of the song comes from the French phrase ‘ la petite mort (in English ‘the little death’) which is used to refer to an orgasm.

Cutting Crew themselves remained active as a band from their founding in 1985 through till 1993. The band then broke up but got back together in 2005, and have been together ever since.

Listen to Cutting Crew’s ‘(I Just) Died in Your Arms‘ as played on Freaks — You’re One of Us in the music video for the new orchestral version below.

You can hear the original release of the track in both the band’s original music video and on the album Broadcast in the Spotify player below that.

The German superhero film Freaks — You’re One of Us is now streaming on Netflix.