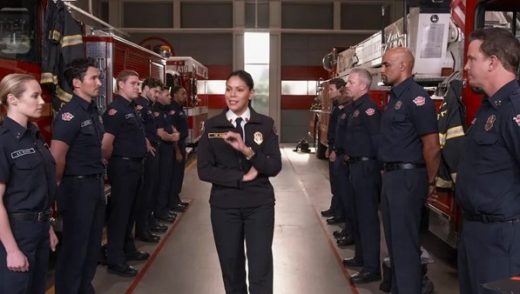 London-based pop singer Desi Valentine’s ‘Back in the Game‘ showed up on Station 19 last night — Station 19, Season 5, Episode 9, “Started from the Bottom“.

It was the song playing during the first scenes of the episode.


The fast-paced and very catch pop rock track was released on his 18-track studio album Through the Lens, which was self-released by the singer in 2021.

Along with that, Valentine has also been making a name for himself in various stage productions in London’s West End over the last few years, including appearing in musicals at the prestigious Shaftesbury Theatre.

Valentine’s ‘Back in the Game‘ isn’t the first song he has had licensed for play on a hit TV series either.

In fact, the singer has been building up a considerable library of song appearances over the last few years, with his music used on a slew of shows as varied as Shameless, The Flash, Valor, Suits, Lucifer, Queen Sugar, Life in a Year, and All Rise.

RELATED: London Grammar’s ‘All My Love‘ showed up on Station 19 and it’s beautiful — Listen!

Listen to Desi Valentine’s ‘Back in the Game‘ from last night’s Station 19, and you will easily hear why.

You can do that, by the way, on his album Through the Lens down below.

Meanwhile, the latest season of Station 19 is now airing on ABC.