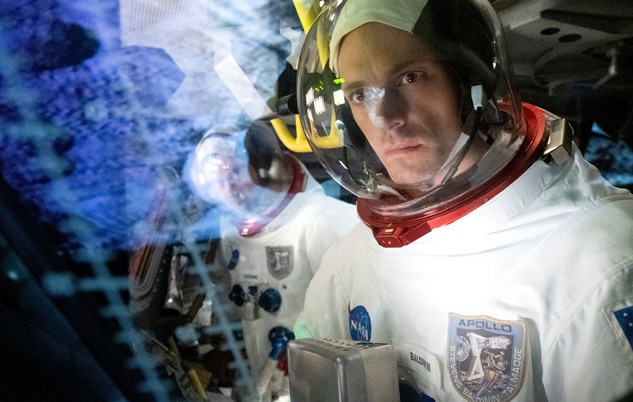 Iconic American rock band Devo’s ‘Whip It‘ was played on the soundtrack of last night’s episode of the sci-fi series For All Mankind on Apple TV+ — For All Mankind, Season 2, Episode 3, “Rules of Engagement“, which aired on March 5th, 2021.

The song was heard as we see Gord out of shape but still suiting up.


Devo’s ‘Whip It‘ is a track from the Ohio-based rock band’s third studio album Freedom of Choice. The synth pop song was released in August, 1980 and is the song the indie band is most-recognized for recording.

The song charted on four different American charts, the highest at #13 on the U.S. Cash Box chart, as well as charting high in Canada, Australia and New Zealand.

‘Whip It‘ also went on to be certified Gold in Canada and the United States.

The band Devo was founded in 1973 in Akron, Ohio by two sets of brothers — Mark and Bob Mothersbaugh and Gerald and Bob Casale. The band members are known for their kitschy stage performances.

Devo was in existence from 1973 through until 1991 when the members decided to go on hiatus. The break lasted for more than five years, until the members got back together for a reunion concert at Sundance Film Festival.

They have stayed active since, releasing a new single — ‘Watch Us Work It‘ — in late 2007, although Bob Casale died in 2014 of heart failure, and new members came and went.

Nowadays, Devo comprises Mark and Bob Mothersbaugh, Gerald Casale, guitarist and keyboardist Josh Hager and drummer Josh Freese. The band still performs live and in late 2018 were nominated to be inducted into the Rock and Roll Hall of Fame.

Listen to Devo’s ‘Whip It‘ as heard on For All Mankind last night in the song’s official music video and on the band’s album Freedom of Choice.