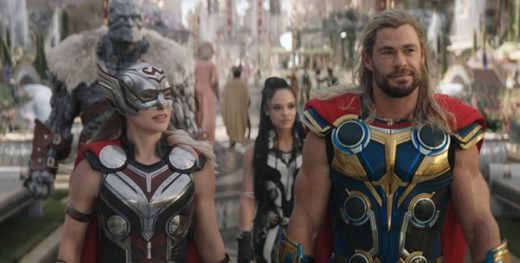 American heavy metal band Dio’s ‘Rainbow in the Dark‘ was one of the fabulous 1980s tracks played on the soundtrack of Thor: Love and Thunder this weekend.

This time, it was nicely played over the film’s end credits. Although some fans already expected the song to make an appearance in the film way back in 2019, when the track was also used to announce the film at San Diego Comic Con.


Dio’s ‘Rainbow in the Dark‘ was the second single released from the band’s debut album Holy Diver, which came out in October, 1983 and was such a big hit for the American band, it went on to be certified double-platinum.

The song itself went to #12 on the U.S. Billboard Album Rock Tracks chart, as well as #46 on the UK Singles chart.

Dio’s ‘Rainbow in the Dark‘ also has a music video that was shot in some of the seedier areas of London, and featured lead vocalist Ronny James Dio performing the song on the city’s rooftops. (Watch below)

Listen to Dio’s ‘Rainbow in the Dark‘ on the band’s Holy Diver album, and in the song’s music video. It may be an almost 40-year-old song at this point, but it still packs a helluva kick.

You can also hear more songs from the Thor: Love and Thunder soundtrack on Leo Sigh.