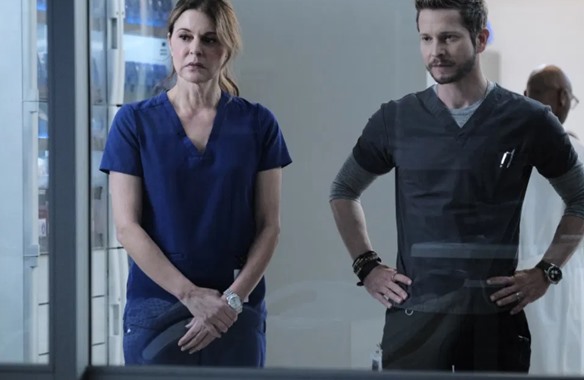 American rock band Eagles of Death Metal’s ‘Flames Go Higher‘ was that song playing on The Resident last night as Devon and Billie are heading for the same parking spot — The Resident, Season 4, Episode 6, “Requiems & Revivals”.

Eagles of Death Metal’s ‘Flames Go Higher’ is an oldie but a goodie when it comes to early 21st century garage rock/alternative rock.

The pretty mellow rock track was first released on the band’s debut studio album Peace, Love, Death Metal, which saw the light of day via the Ant Acid Audio label in 2004.

Eagles of Death Metal comprises main members vocalist and guitarist Jesse Hughes, and drummer Josh Homme (who is also long-time member of the highly successful band Queens of the Stone Age). Other musicians join the band for both recordings and live concerts.

The band has been releasing music since 1998 when they appeared on Josh Homme’s The Desert Sessions, Volumes 3 & 4. c

(Continue reading and listen to Death Metal’s ‘Flames Go Higher’ after the promo for Active Child’s ‘Silhoutte,’, which was played on the same The Resident episode…)

In recent years, however, they tragically came to the forefront of the news media as the band playing a sold out show at the Bataclan in Paris when terrorists attacked the theatre in one of several co-ordinated attacks around the French city.

Eighty-nine people were killed that night, including Eagles of Death Metal’s merchandise manager. Every band member survived the night, by either being able to escape the theater via backstage, or by hiding in the theater until French police stormed the building and rescued them.

Soon afterwards, Josh Homme asked musicians to release a cover of the band’s song ‘I Love You All the Time‘, with all royalties that would normally be due the band going to a fund to help victims of the attack instead.

Listen to Eagles of Death Metal’s ‘Flames Go Higher‘ in the video and on the band’s album Peace Love Death Metal below.