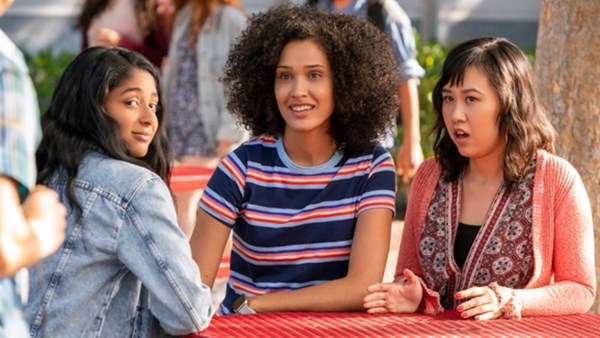 British electro pop band Glass Animals’ ‘Heat Waves‘ was played on the second season of the Netflix drama Never Have I Ever this week — Never Have I Ever, Season 2, Episode 9, “…stalked my own mother“.

The song was heard as Paxton arrives in Devi’s room, and during the episode’s end credits.

Glass Animals’ ‘Heat Waves‘ is a single from the band’s third studio album Dreamland, which was released in mid-2020 via Polydor and Republic record labels.

The song didn’t do particularly well upon release for the British band, but then became a worldwide hit in March, 2021 starting in Australia, where it hit the top spot on the Aussie ARIA charts.

It charted in the UK at #19 on the UK Singles chart, and in the United States on five charts. The track’s highest placing in the U.S. was on the Billboard Hot Rock & Alternative Songs chart where it ranked at #2.

‘Heat Waves‘ was also certified Platinum in Australia, New Zealand, Canada and the U.S., and Gold in the UK.

Listen to Glass Animals’ ‘Heat Waves‘ as heard on Never Have I Ever in the song’s official video.

The video mourns the live music industry that will now never recover due to Covid-19 restrictions.

The Glass Animals track has also been featured on Siesta Key, Good Trouble, and Love Island (UK) among other hit series.

Season 2 of Never Have I Ever is currently available for streaming on Netflix.