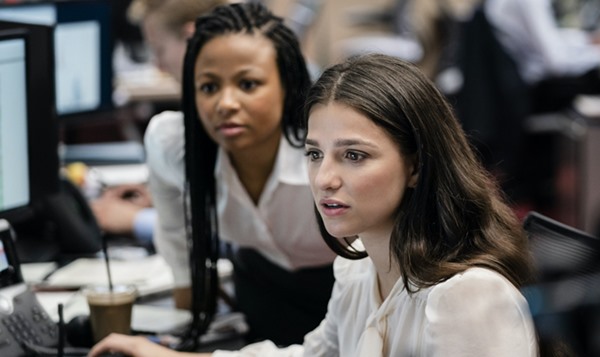 English hip hop singer and rapper IAM DDB’s ‘Shade‘ was one of the tracks played on the new episode of the British TV series Industry this week — Industry, Season 1, Episode 4,”Sesh“. The episode aired on HBO on November 27th, 2020.

The track itself was heard playing in the background at Harper’s birthday party.

IAM DDB’s ‘Shade’ is from her debut mixtape Hoodrich, Vol. 3, which was released in 2017. It was the first of three mixtapes the talented English rapper has released in the last four years, along with two EPs, more than a dozen singles and several collaborations with other artists.

IAM DDB, aka Diana De Brito, is based in her hometown of Manchester, England, where she has lived since her family moved from Portugal to the UK when she was just a young child.

She has been creating and releasing music professionally since 2016, but her career took a big leap forward when she was noticed by the iconic industry figure/music critics poll BBC Sound of…in 2018.

She was listed in the number spot, garnering even more attention to her standout songs. (continuing reading below…)

Listen to IAM DDB’s ‘Shade’ as played on this week’s Industry in the video and on her mixtape Hoodrich, Vol. 3 in the Spotify player below.

The music video, which has IAM DDB and a friend doing exactly what they want to do — in this case, wearing swimsuits and fur coats as they wander around supermarkets and then sitting in a limo drinking booze and smoking — has gained more than 38 million views on YouTube so far.