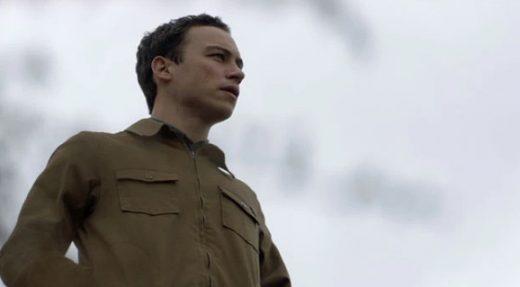 American indie singer songwriter and guitarist Jon Foreman’s ‘The Ocean Beyond the Sea‘ was that stunning and quite dramatic song played at the end of the season finale of Animal Kingdom last weekend — Animal Kingdom, Season 6, Episode 13, “Fubar“.

The song was heard playing as we see J enjoying his new life in Fiji.


Jon Foreman’s ‘The Ocean Beyond the Sea‘ is the first track from his self-released 12-track debut studio album Departures, which came out in 2021.

His first album was released after Foreman had spent more than a decade recording and releasing over a dozen EPs, as well as several compilation albums.

Yes, he is quite prolific.

Especially as Foreman is also the lead singer and guitarist (and composer) for the indie rock band Switchfoot, and has been since 1996.

Listen to Jon Foreman’s ‘The Ocean Beyond the Sea‘ as heard on the last ever episode of Animal Kingdom in the video down below, and on Foreman’s Departures album.

You can currently watch every episode of the last season of Animal Kingdom on TNT.

RELATED: White Zombie’s ‘More Human Than Human‘ was one of the tracks played on the last episode of the crime drama Animal Kingdom this week — Listen