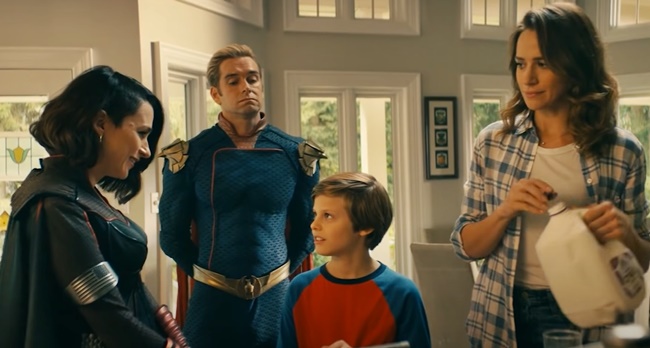 Take last night’s episode of the superhero series — The Boys, Season 2, Episode 7, “Butcher, Baker, Candlestick Maker” and the use of K.C. and the Sunshine Band’s ‘That’s the Way (I Like It)‘. (Listen below).

A song you might not expect to show up on a series about super heroes out of control but, suddenly, there it was.

K.C. and the Sunshine Band’s ‘That’s the Way (I Like It)‘ was originally released in mid-1975 on their self-titled second studio album.

The track became a huge hit for the disco and funk band both in the United States and internationally. It has also become one of the songs the band is now most known for releasing.

Interestingly too, while ‘That’s the Way (I Like It)‘ did not get as much radio play as it probably would nowadays over 45 years later, due to its hardly camouflaged sexual theme, it still did incredibly well in clubs around the world.

Then again, when you have had a couple of drinks and are dancing with someone you think is really hot, what better song to dance to than that?

Listen to Jon Batiste’s ‘What a Wonderful World’ from The Boys, Season 2, Episode 7 opening

‘That’s the Way (I Like It)‘ has also been licensed for use in other hit TV series in the past, including The Get Down, Black Mirror, Glee, Scrubs and The Simpsons, as well as on movies like Legally Blonde and Any Given Sunday.

Listen to K.C. and the Sunshine Band’s ‘That’s the Way (I Like It)‘ in the audio video below. There is also a fun live version from a concert the band performed in New Jersey in 2004 that’s worth watching below that.

As for The Boys, the final episode of Season 2 will hit Prime Video next week. But, no worries, the show has already been greenlit for Season 3.