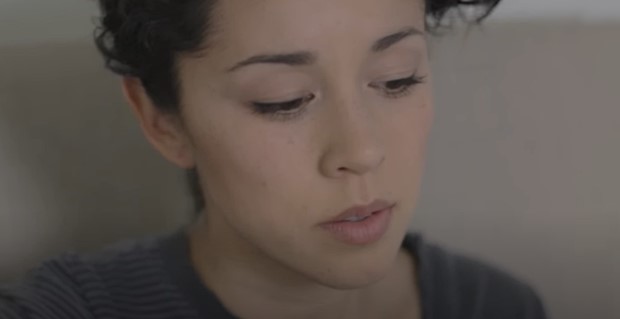 There is a beautiful cover version of Radiohead’s ‘Creep‘ that has been on the YouTube channel of American acoustic pop singer songwriter Kina Grannis for the last three years. A simple version of the song with Grannis sitting on her bed, playing guitar and singing.

This week, Kina Grannis’s ‘Creep‘ showed up on the newest episode of the Australian TV drama Wentworth — Wentworth, Season 8, Episode 6, “Fugitive” — playing at the end of the episode.

‘Creep‘ is not the first track Grannis has had featured on a hit TV show, however, as her music has also been licensed for play on shows as diverse as Switched at Birth, The Fosters, Pretty Little Liars, Home and Away, My Life as Liz, Nurse Jackie, Big Mouth, iZombie, Suits and World of Jenks, as well as the hit movie Crazy Rich Asians.

Grannis also made a cameo appearance in that movie.

Related: Dear Criminals ‘Where We Started‘ was that gorgeous song played during Maria’s suicide attempt

In April, 2017, tiring of dealing with record labels, Grannis came to the conclusion she could crowdfund her own record label by asking her many fans for support.

Her excited comments about how successful that crowdfunding was can be watched at the end of her ‘Creep’ video (watch below).

As Grannis explains on her Patreon page:

During my last 10 or so years of being a full-time musician I have learned time and time again that the only thing I needed was my listeners. You.

In recent years, through the support of individual patrons, I began getting paid for the videos I was putting out into the world for the first time in history. You, You, You.

Grannis’s indie label was eventually named KG Records. Her full-length studio album In The Waiting was released on the label in 2018, along with other releases later.

As for Kina Grannis’s ‘Creep‘ as featured on Wentworth, you can hear that in her music video below, because it is really is gorgeous. You can also hear the song on Spotify along with many of her other equally lovely releases.