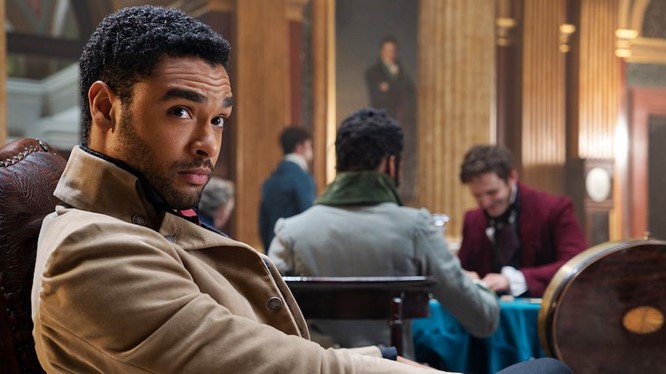 The beautiful instrumental piece was heard as Simon and Daphne make love for the first time.

As for Kris Bowers, the Los Angeles native began taking piano lessons at the age of four. While still in high school, he studied jazz at Colburn School for Performing Arts.]

After high school, he went to the famed Juilliard School from where he eventually graduated with a Master’s degree in jazz performance.

Bowers got his break in the professional music world when he played on the Jay Z and Kanye West album Watch the Throne.

From there, he began collaborating with other well-known musicians, toured with a few and then released his own debut album Heroes + Misfits in 2014.

That led to appearances at jazz festivals around the world, including in Spain, Japan and the United Kingdom.

Kris Bowers also has a successful career as a composer for film and TV. (continue reading and listen to Kris Bowers’ ‘Strange’ after the promo…)

He has worked on Showtime documentaries, including Kobe Bryant’s Muse, scored music for the TV show Dear White People, and for the film Green Book.

Bowers is currently beginning work with the iconic film composer Hans Zimmer on the upcoming movie  Space Jam: A New Legacy, as well as working on music for two other new films — Respect, about the life of Aretha Franklin, and King Richard, about the life of tennis stars Venus and Serena Williams’ father.

Listen to Kris Bowers ‘Strange‘ featuring cellist Hillary Smith as heard on Bridgerton in the video and on the EP below.