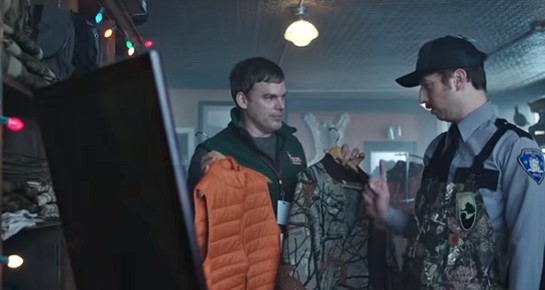 The song was played as Dexter is opening Fred’s Fish & Game, the small town store where he now works.

Love and Rockets’ ‘Haunted When the Minutes Drag‘ is from the band’s debut studio album Seventh Dream of Teenage Heaven, which came out in late 1985 via the Beggars Banquet record label.

The album became a cult hit on college radio around the United States, and was a huge hit in bars and nightclubs playing alternative music.

When Seventh Dream of Teenage Heaven was released, I was a radio DJ at one of the most popular alternative radio stations in the United States, and the album was one of our most-requested albums for months.

‘Haunted When the Minutes Drag‘, with its guitar-laden melody, was one of its most loved tracks.

Listen to Love and Rockets’ ‘Haunted When the Minutes Drag‘ as heard on Dexter last night on that album, and in a fabulous live performance the band gave of the track at Lollapalooza in 2008 down below.

Watch the trailer for Showtime’s Dexter: New Blood down there as well.