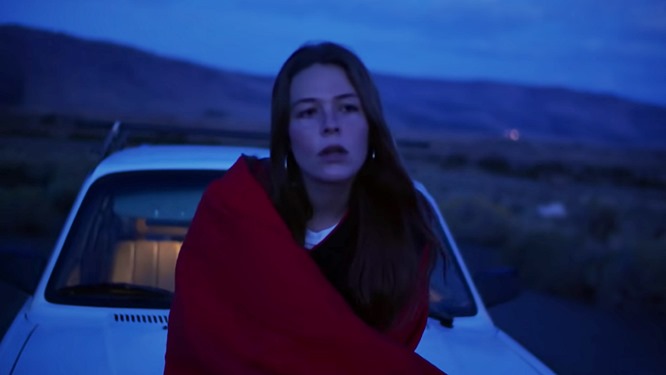 American singer songwriter Maggie Rogers’ ‘Light On‘ was that gorgeous song playing on Dickinson last night as Emily is on the dark stage with opera singer Adelaide May — Dickinson, Season 2, Episode 6, “Split the lark“.

Maggie Rogers’ ‘Light On‘ is the fifth single from the singer’s debut studio album Heard It in a Past Life. It was written by Rogers in collaboration with songwriter/producer Greg Kurstin and English singer songwriter Kid Harpoon.

Rogers herself described the reason she wrote the song, and how she wanted it to be a thank you to her fans, this way:

I wrote this record (her debut album) which captures all those feelings of being overwhelmed and being uncertain. I realized the one story I hadn’t written was about all of the joy. I really wanted to say thank you to my fans, and write a letter to them to tell them what had happened and how much they meant to me. Because in all this time when I was really uncertain, I would get on stage every night, and be so certain. It was never the music I was unsure about, it was everything else around it that I found overwhelming.”

It also hit #40 on the New Zealand Singles chart as her one out-of-the-country chart success. (continue reading and listen to Maggie Rogers’ ‘Light On‘ after the promo for another of her stunning songs…)

Maggie Rogers ‘Burning’ gets Obama endorsement for ‘Favorite Music of 2019’

Listen to Maggie Rogers’ ‘Light On‘ as heard on Dickinson in the song’s official music video, and on her debut album. An album that features song after song with addictive melodies and thoughtful lyrics.

The video has Rogers driving long days and miles across the United States, sleeping in her car, bathing in streams, dancing in the desert, and generally being introspective while still feeling good about how things are turning out.

Listen to Dua Lipa’s ‘Boys Will Be Boys’ from Gossip Girl, Season 1, Episode 9