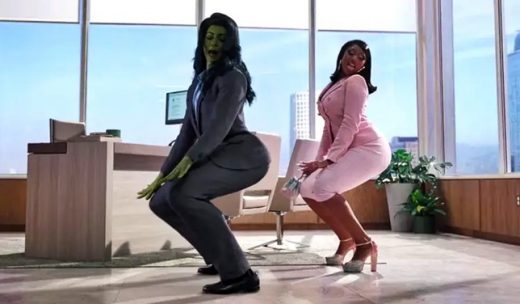 That is also one of the reasons why Megan Thee Stallion’s ‘Body‘ was played on She-Hulk, Season 1, Episode 3, “The People v. Emil Blonsky” during that comedic scene where Jen and Megan dance and twerk in Jen’s office after she has signed Megan as a client.


Megan Thee Stallion’s ‘Body‘ was the third single from the rapper’s debut studio album Good News, which came out on the 1501 Certified Entertainment record label in late 2020.

It also has an official music video featuring the rapper, along with guest appearances by singer Taraji P. Henson and models Blac Chyna, and Jordyn Woods.

Listen to Megan Thee Stallion’s ‘Body‘ as heard on She-Hulk in the song’s music video, and on her Good News album.

Watch She-Hulk on Disney+, although it may not be around for long as the show is getting terrible reviews.

Listen to more music from She-Hulk. and learn about the artists that created it, on Leo Sigh.

RELATED: Yonaka’s ‘Seize the Power’ showed up on Episode 3 of She-Hulk and it’s hella cool — Listen!