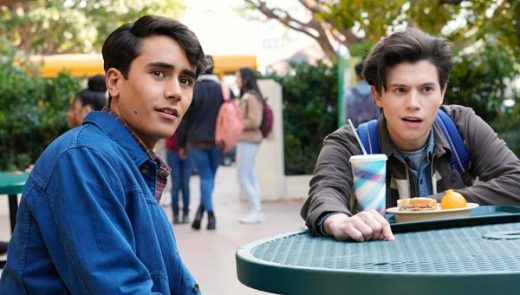 The song was played as Isabel and Armando get back from the PFLAG meeting, and as Victor goes to Rahim’s house.

The repetitive track was self-released by the duo as a single in 2016, and is currently one of their most popular songs.

Especially after it was also played on the soundtracks of TV shows like Wynonna Earp, Riverdale, and Saving Hope.

It became very popular for the band, however, when it was featured in the hit video game Life is Strange 2.

Milk & Bone, by the way, are Canadian artists Laurence Lafond-Beaulne and Camille Poliquin. And yes, they are as French-speaking as their names, but write all of their song’s lyrics in English.

They got their start, and many of their first fans, by posting music to SoundCloud while working on their first album.

An album that was released in 2015, then followed up by a second album a couple of years later and a debut EP.

As their music is this lovely, let’s hope they keep up the releases, eh?

Listen to Milk & Bone’s ‘Natalie‘ as heard on Love, Victor in the video, and on the Spotify player. And listen to more cool music from Love, Victor on Leo Sigh.