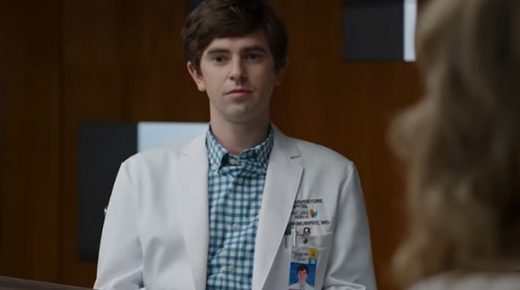 Color me excited when Canadian indie rock band Arcade Fire’s ‘My Body is a Cage‘ showed up on The Good Doctor last night —  The Good Doctor, Season 5, Episode 8, “Rebellion“.

‘My Body is a Cage‘ was the one playing as Alma breaks down in tears, and has been my favorite Arcade Fire song since it was released back in 2007 on the band’s second album Neon Bible.


I love the song’s distant feel, as lead singer Win Butler’s voice is at an almost secondary level to the music, and the way it seems to almost echo throughout the track as the power of those huge organ pipes slam in.

Because that, to me, perfectly expresses the emotions of the song — the fear of moving towards the one you love, with no idea what the outcome will be.

And those first lyrics grab you like no other song:

Listen to Arcade Fire’s ‘My Body is a Cage‘ as heard on last night’s The Good Doctor in the video, and on band’s sophomore album Neon Bible.

READ: The Strumbellas’ ‘We Don’t Know‘ playing on The Good Doctor is so damned cool

The critically acclaimed album was released in early 2007 via Merge Records, and went on to chart high in an amazing 20 countries, including the U.S. where it hit #1 on the Independent Albums chart, the Top Rock Albums chart and the Top Tastemaker Albums chart.

Amazing for an indie Canadian band.

The Good Doctor Season 5 is airing on ABC.