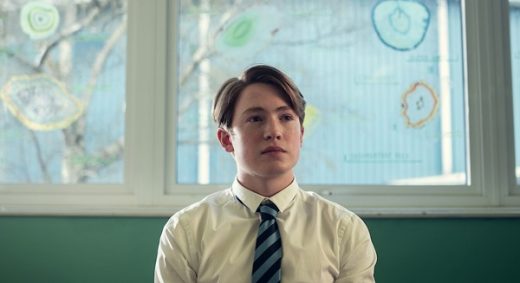 The hit British gay comedy drama Heartstopper features a plethora of cool music on its soundtrack, including Orla Gartland’s ‘Why Am I Like This?‘, which showed up on Heartstopper, Season 1, Episode 2, “Crush” this month.

That almost agonizing song was played at the end of the episode as Nick is looking at the photographs of he and Charlie.


Dublin-based singer Orla Gartland released ‘Why Am I Like This?‘ on her YouTube channel back in late 2018. A channel that has, so far, garnered her 273,000 followers and almost 26 million views.

Something that is actually quite surprising to me as, because of the ridiculously professional quality of the audio the singer releases on her channel, (audio that is often recorded in her bedroom), and for the catchy quality of her songs, and her phenomenal voice, I would have thought far more people would have listened to Gartland’s music by now.

The song was also released as the title track of Gartland’s four-track fourth EP of the same name the following year.

RELATED: Listen to Wolf Alice’s ‘Don’t Delete the Kisses‘ from the Heartstopper soundtrack

And, honestly, until watching Heartstopper, I was one of the billions of people who had never heard of Orla Gartland (sorry, there are billions of songs so, even as a music journalist, it’s impossible to come across every talented singer I would probably like), regardless that she has a debut studio album out and a slew of independently-released EPs and singles.

But, after listening to more of Orla Gartland’s songs, and following her on Spotify, I am now predicting this Irish singer songwriter’s career is about to explode.

Because, man, her songs and her lyrics are so damned good! (And speaking of, do listen to her ‘You’re Not Special, Babe‘ as that’s a helluva banging song).

Listen to Orla Gartland’s ‘Why Am I Like This?‘ as heard on Heartstopper in the video she released on her YouTube channel performing the song live, and on her EP of the same name.