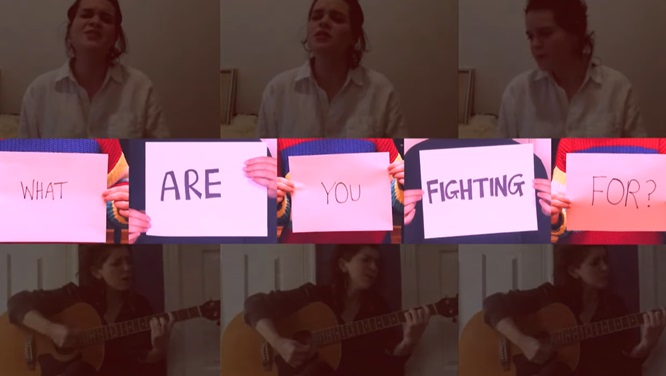 Although Grey’s Anatomy has quickly become one of my least favorite series this year, obsessed with spreading Covid-19 panic and hysteria as it is, the show is definitely still showcasing some of the best contemporary music out there.

That alone still makes it a show to pay attention to.


Songs like the superb American electro-pop duo Overcoats’ ‘The Fight (Reprise)‘, which showed up on Grey’s Anatomy last night playing during the intro — Grey’s Anatomy, Season 17, Episode 5, “Fight the Power” .

Overcoats’ ‘The Fight (Reprise)‘ is from the duo’s five-track EP The Fight (Continued), which was released earlier this year via Loma Vista Recordings.

The song has gorgeous, quite ethereal vocals, a pretty melody and a soft, warm feel to it. Something I honestly appreciate these days, when so much of the world is in turmoil.

‘The Fight (Reprise)‘ also comes with a powerful and quite touching music video.

One that was compiled from videos shot by Overcoats’ fans about the things they are fighting for — human rights, LGBT rights everywhere, mental health awareness, inner peace, inclusion, healthcare for all, their families, access to abortion and, of course, for better leaders — things most of us care about in some way or another.

As for Overcoats, they are singer songwriters Hana Elion and JJ Mitchell, who both had extremely interesting younger lives themselves.

Hana was born in the U.S., but spent substantial amounts of time in Belize, Uganda and Jamaica growing up, while JJ was born in London and grew up in New York, the UK and Egypt.

The pair met in college and have been making music together ever since.

Listen to Overcoats’ ‘The Fight (Reprise)‘ from Grey’s Anatomy in the song’s music video below and on the duo’s latest EP down there too.