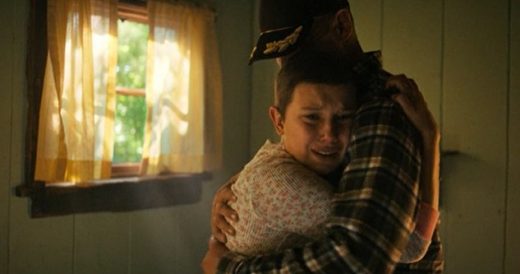 Swedish neo-classical multi-instrumentalist and composer Peter Sandberg’s ‘Deep‘ was featured on the soundtrack of Stranger Things again this week.

It is the second time the beautiful almost soothing instrumental piece has been played on the show. First being played on Season 3 of the series, and now on Stranger Things, Season 4, Episode 9, “Chapter Nine: The Piggyback“.


Just as the first time it was played, ‘Deep‘ was also used in a scene with El and Hopper — this time, as Hopper walks through the door as El is crying, and he and El are reunited.

‘Deep’ was released by Sandberg as a single in 2019, and then appeared on the Swedish musician’s 10-track debut album Motion, which was released on the Phases Records label.

It came with a touching music video featuring a dancer alone in a studio.

She begins to dance to the music in a fluid way, but then quickly changes to ever more frantic and jarring mechanical movements which, at first glance, don’t seem to fit the smoothly flowing music, until you realize they perfectly illustrate the emotion of it.

Especially when, by the end of the video, another version of the dancer is reflected in the mirror standing watching her as she moves.

One person in the comments section of the music video said she loved it as it showed exactly how she felt when she was in the middle of a panic attack. Almost as if she was outside herself looking in, just waiting for it to be over.

Listen to Peter Sandberg’s ‘Deep‘ from Stranger Things in that music video, and on Sandberg’s Motion album.

Learn more about the Swedish musician on his official website.

RELATED: Moby’s gorgeous ‘When It’s Cold I’d Like to Die‘ played on Stranger Things as both Eddie and Max die