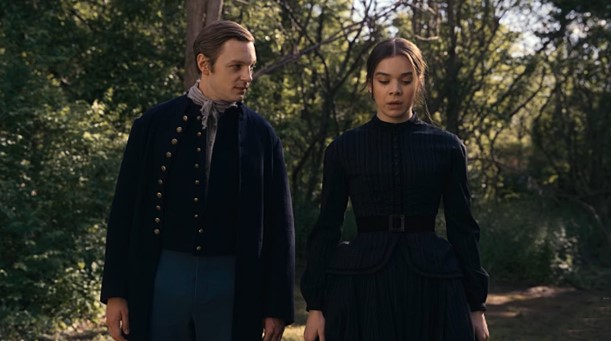 English all-female rock band PINS’ ‘In Nightmares‘ was the track playing over the end credits of the latest episode of the Apple TV+ series Dickinson this week — Dickinson, Season 3, Episode 8, “My Life had stood – a Loaded Gun –“.

PINS’ ‘In Nightmares‘ was released by the British band in 2017 as a standalone single.

As for the band PINS, it was formed in 2011 when photographer Faith Vern wanted to join a rock band, but didn’t want to be the ‘token female’. So she scouted musicians and formed an all-female band instead.

Since then, PINS has formed their own record label, Haus of PINS’, released two EPS, a number of singles and three full-length albums.

Their most recent album, Hot Slick, came out in early 2020.

In addition to this week’s feature on Dickinson, the women of PINS have also created a pretty lucrative career for themselves getting their music licensed for TV shows like Arrow, Hanna, Wynonna Earp, Lucifer, Awkward and Billions.

No wonder as the music they create is pretty darned cool.

Listen to PINS’ ‘In Nightmares‘ from last night’s Dickinson on the video, and on the Spotify player.

You can also learn more about them, and keep up on the band’s latest news, via their website.