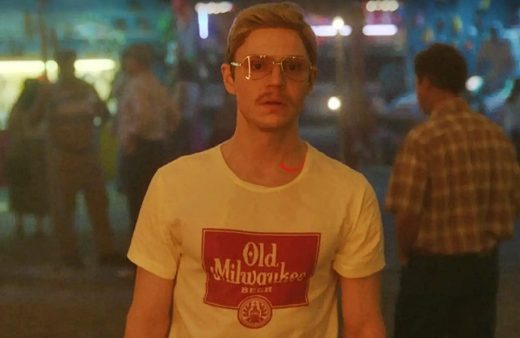 While I have to admit I am not a particular fan of the new Netflix crime drama series Dahmer – Monster: The Jeffrey Dahmer Story as it is a bit too manipulative and exploitative, the show does feature super popular music from the 1970s and 80s on its soundtrack.

And that alone makes it an interesting watch.

And, if you haven’t heard of Pretty Poison before, don’t feel too bad as neither had I, up until doing research on what that fabulous song was playing in the hotel room scenes.

That is because Pretty Poison has really only ever had the one hit, and a hit that came about after Pretty Poison’s ‘Catch Me (I’m Falling)‘ was featured on the soundtrack of the Jon Cryer film Hiding Out back in 1987 — the year the song was released.

The song went on to appear on Pretty Poison’s debut album of the same name, and eventually hit #1 on the Billboard Hot Dance Club Play chart later that year.

It also hit #8 on the Billboard Hot 100 chart, and was ultimately certified Gold.

In recent years, Pretty Poison’s ‘Catch Me (I’m Falling)‘ has also shown up on Breaking Bad, Pose and The Righteous Gemstones.

Listen to Pretty Poison’s ‘Catch Me (I’m Falling)‘ from Dahmer: Monster in the track’s music video, and on the band’s album of the same name.

RELATED: Sade’s ‘Hang On To Your Love‘ showed up on Dahmer: Monster — The Jeffrey Dahmer Story this week, and it’s still as cool as when it was released decades ago