Soul duo Sam & Dave’s ‘Hold On, I’m Comin‘ was that cool R&B song that played over the end credits of the post-apocalyptic dark fantasy TV series The Stand last night — The Stand, Season 1, Episode 8, The Stand“.

The song was written by Isaac Hayes and David Porter, and is the title track from the duo’s album of the same name. The album was originally released in 1966 via Stax/Atlantic.

The track was the first big hit for the soul duo, making it into the Top 40 and being named the #1 song of 1966 on the Billboard R&B charts.

More than 20 years, Rolling Stone called it one of the best songs of the previous quarter century. 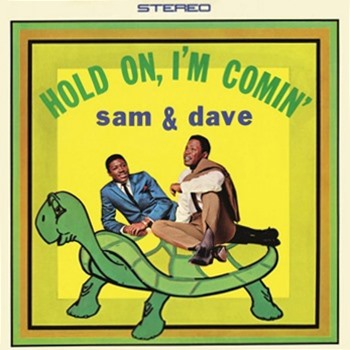 The album remained on the R&B album charts for 19 weeks, and was eventually certified Gold almost 20 years after its initial release.

Sam & Dave’s ‘Hold On, I’m Comin‘ is so well-liked, it has also been licensed and used in hit TV series like Scandal, World of Dance, The Umbrella Academy, Black-ish, New Amsterdam, White Collar and S.W.A.T.

(continue reading and listen to Sam & David’s ‘Hold On, I’m Comin‘ after the music promo of U96’s ‘Heaven‘ from the same episode of The Stand...)

Listen to Sam & Dave’s ‘Hold On, I’m Comin‘ as heard on The Stand in the video of one of their superb live performances of the song below.

You will also find the recorded version of the track on the duo’s 1966 studio album.

The Stand mini-series is currently airing on CBS All Access.