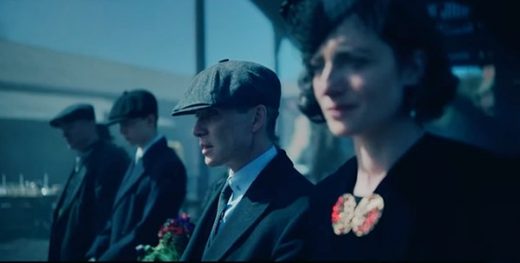 One thing about recent TV series is music from Irish singer songwriter Sinéad O’Connor has been showing up more and more lately.

Including one of my favorites, Sinéad O’Connor’s ‘In This Heart‘, which was played on Peaky Blinders this week during the scene at Ruby’s funeral — Peaky Blinders, Season 6, Episode 4, “Sapphire“.


It was one of two songs by the Irish singer featured on the episode.

Sinéad O’Connor’s ‘In This Heart‘ is from the singer’s fourth studio album Universal Mother.

One of her not-quite-as-popular albums, and one thought to be more of a therapeutic exercise for O’Connor than anything else after the singer spent many years dealing with various emotional issues.

The album did chart in the U.S. at #36 on the Billboard 200 chart, as well as charting in nine other countries with its highest placing in Austria at #7. It was also well reviewed by music critics.

RELATED: Listen to Sinéad O’Connor’s gorgeous ‘Before the War’ from Euphoria

‘In This Heart‘ is a gorgeous a cappella song that perfectly proves what a stunningly pure voice Sinéad O’Connor has always had.

Something I can attest to, as I saw her live in Dallas back in 1990 when she was at the height of her popularity, and her live performance was stunning. Even better than anything she has recorded on album before or since.

Listen to Sinéad O’Connor’s ‘In This Heart‘ as heard on Peaky Blinders this week. It is so damned pretty.