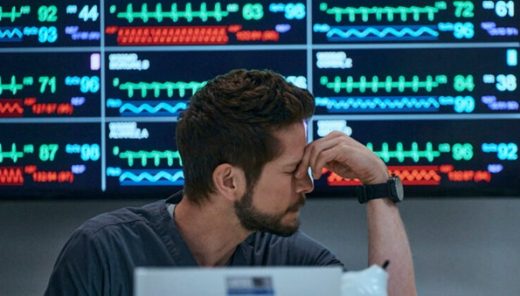 The now defunct American indie rock band Sparklehorse’s ‘Sad and Beautiful World‘ was played on the soundtrack of last night’s The Resident — The Resident, Season 5, Episode 18, “Ride or Die“.

The song was played on the soundtrack as A.J. takes Carol home to be cared for, and as Jayana tells Carol about hospice care.


Sparklehorse’s ‘Sad and Beautiful World‘ is a single from the band’s oddly named debut studio album Vivadixiesubmarinetransmissionplot, which was released on the Capitol record label in August, 1995.

The song was written about the emotions that often occur in a relationship, with a person who can make you sad and angry, and yet still continue to hold your heart.

Sparklehorse, by the way, was musician, singer and songwriter Mark Linkous along with Paul Watson, Scott Minor, Johnny Hott and Scott Fitzsimmons.

Linkous created the indie rock project in 1994 after deciding to move away from Los Angeles to Richmond, Virginia once he realized how poisonous the L.A. music scene can often be.

The band released five studio albums and three EPs, and stayed in existence until Linkous committed suicide in 2010 when they soon after broke up.

Linkous had struggled for many years with drug and alcohol addiction and depression before he took his own life. Thus succumbing to that sad and beautiful world.

Listen to Sparklehorse’s ‘Sad and Beautiful World‘ as heard on last night’s The Resident on their Vivadixiesubmarinetransmissionplot album, and in a really lovely unofficial music video created for the song.