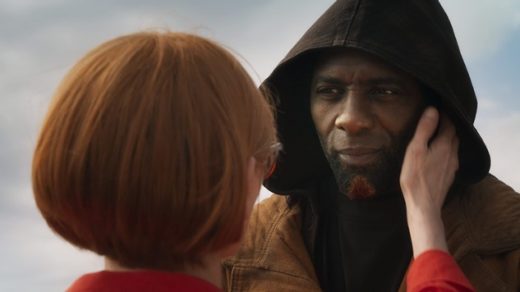 Yep, it was Suuns’ ‘2020” that was played on the Three Thousand Years of Longing trailer. (Watch below)


Suuns’ ‘2020‘ stands out not only for its pounding beat, but also that cool 1970s sounding electric guitar riff.

The song was released on the band’s 2013 album Images du Futur, which came out on the Secretly Canadian label.

Suuns, by the way, is lead singer and guitarist Ben Shemie, bassist Joe Yarmush, and drummer Liam O’Neill. The band was formed in mid-2007.

Listen to Suun’s ‘2020‘ as heard on the Three Thousand Years of Longing trailer in the band’s music video for the track, and on their Images du Futur album.

You can also hear how the song was used in the Three Thousand Years of Longing trailer below.

Three Thousands Years of Longing stars Tilda Swinton and Idris Elba, and tells the story of a woman (Alithea played by Swinton) who buys an interesting looking bottle while on holiday in Istanbul.

Upon opening the bottle, out pops a Djinn (Elba) who promises to grant her three wishes. After she refuses, saying she thinks he is tricking her, he responds by telling her three stories from his life.

RELATED: Idris Elba has a foot fetish — at least according to Kate Winslet