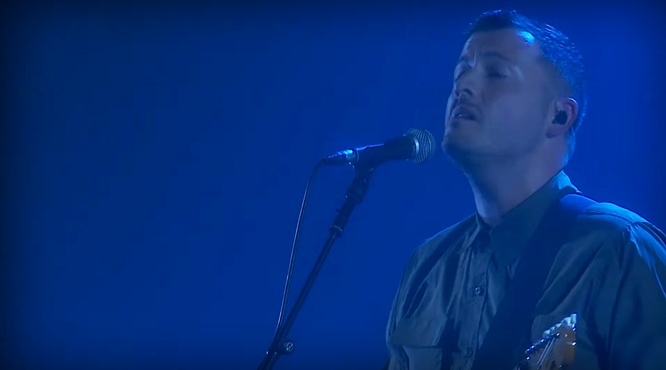 She then kisses him.

SYML’s ‘Meant to Stay Hid‘ was released as a standalone single in 2019 via Nettwerk Music Group and, while featured on Virgin River, has also been licensed for play on TV series like Good Trouble, Go! and Love Island UK.

It is also one of a huge number of songs SYML has had featured on hit TV series in the U.S. and Europe, with shows like Dirk Gently’s Holistic Detective Agency, Station 19, Killjoys, The Royals, Elementary, New Amsterdam, God Friended Me, Prodigal Son, The Fosters and Teen Wolf being just some of the popular series that have licensed his music.

Much of that has to do with how pretty his often piano-driven or guitar-driven music is, and how unique, quirky and lovely his voice.

SYML himself, aka Brian Fennell, is a former member of the indie rock band Barcelona. He eventually left the band and went solo, kicking off his music project SYML with his debut EP Hurt For Me in 2016.

Since then, the Washington State native has released four other EPs, and a slew of singles. His self-titled debut studio album hit shelves in 2019. (continue reading and listen to SYML’s ‘Meant to Stay Hid‘ below…)

Having his music played on the soundtracks of popular shows has also grown the indie singer songwriter a large fan base. On Spotify alone, he has almost 4.5 million followers.

As for SYML’s ‘Meant to Stay Hid‘, the singer says he wrote the song about loss:

‘Meant To Stay Hid’ is a personal song about loss. It’s that tangible and uncomfortable whole-body feeling that someone is gone. It’s the reality that our memory of them will fade and change. But it’s also the beautiful, yet unreasonable, hope that we will be with them again.

Listen to SYML’s ‘Meant to Stay Hid‘ as heard on Virgin River in the official lyric video below and in the Spotify widget.

The singer also performed a gorgeous live rendition of the song at AB – Ancienne Belgique late last year, which you should definitely watch below.