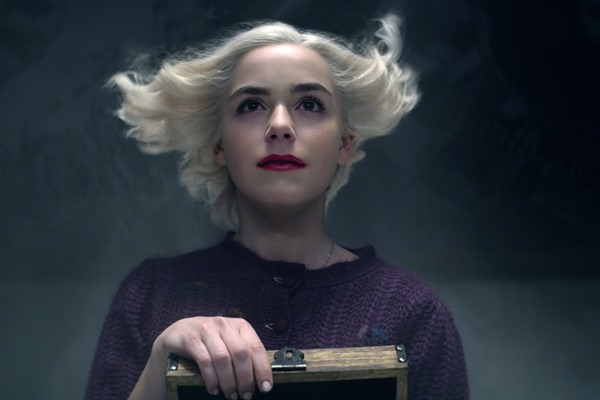 The song was played as Sabrina Morningstar is getting punch and as Sabrina Spellman, in disguise, heads towards her.

The Correspondents’ ‘Fear & Delight‘ is from the duo’s debut album Puppet Loosely Strung, which was released in 2014.

A year later, the swing song was chosen as the theme tune for the short-lived British sit-com Crims.

The video was set up using four cameras, which filmed Bruce as he danced around and sang. Each image was then used to create a video with a kaleidoscope effect, showing Bruce in the same shot but from different angles eight or more times.

There is a fascinating video you can watch below featuring Mr. Bruce and director Naren Wilks that shows how Wilks composite camera technique was set up and how the music video was filmed. (continue reading and listen to The Correspondents’ ‘Fear & Delight‘ after the promo…)

Listen to Billy Idol’s ‘Dancing with Myself’ from Chilling Adventures of Sabrina, Season 4, Ep.1

As for The Correspondents, the duo was sadly forced to end recently after bandmate and producer Tim “Chucks” Cole unexpectedly died in late 2020.

No cause of death was ever announced.

Listen to The Correspondents’ ‘Fear & Delight‘ as played on Chilling Adventures of Sabrina in that award-winning music video below. It really is a lovely, fun and catchy song and that music video is fabulous.

The final season of Chilling Adventures of Sabrina is now wrapping up on Netflix.