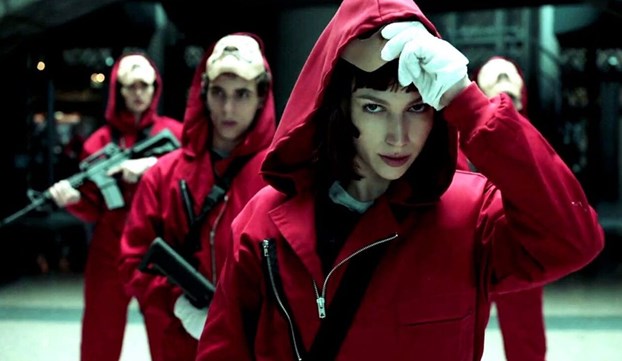 American all-girl R&B pop group The Crystals’ ‘Then He Kissed Me‘ was one of the fabulous tracks played on the Spanish Netflix series Money Heist this week — Money Heist, Season 5, Episode 7, “Ciencia ilusionada“.

The song was playing during the scene where Sierra and The Professor are escaping in the garbage truck.

The Crystals ‘Then He Kissed Me‘ is one of the tracks the 1960s group is the most famous for releasing, making it to #2 on the UK Singles chart, #3 in New Zealand and #6 in the U.S. on two singles charts.

It has also been played on a massive number of TV series and movies, including Family Guy, Speechless, Goodfellas, The Simpsons and To All The Boys: P.S. I Love You.

Coming out in mid-1963, it tells the story of a woman meeting a man, falling in love and eventually getting engaged.

Cover versions of the song have been recorded by Hello and Kiss, with The Beach Boys also releasing the song, but with the title ‘Then I Kissed Her‘.

A clever release as, in their version, the song tells the romance from the perspective of the man.

Listen to The Crystals’ ‘Then He Kissed Me‘ as heard on Money Heist (aka La Casa de Papel) this week.

The second half of Season 5 of the hit series is now streaming via Netflix.