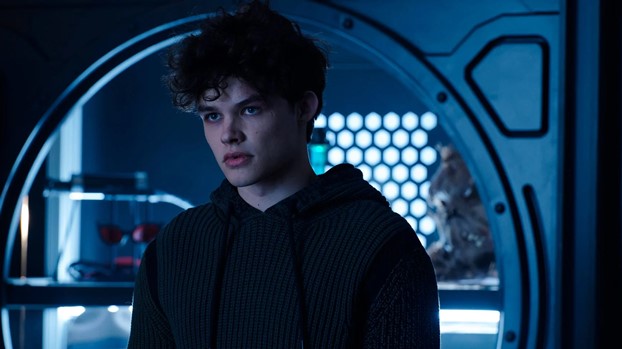 The track was played as Jason heads into Gotham City to meet a girl called Molly who tells him about one of Joker’s goons abducting children. They then argue about whether Batman will be able to fix the problem.

The Mission’s ‘Deliverance‘ is the second single from the English band’s third studio album Carved in Sand, which was released in early 1990 via the Phonogram/Mercury labels.

The track is notable for its standout guitar intro and its pounding drum track.

Deliverance also became the name of the The Mission’s album tour that year.

Their album Carved in Sand spawned four singles, and made it to the #7 spot on the UK Albums chart, which ultimately made it the best-selling album The Mission ever created.

A second release of the album was made in 2008. This time, it was a two-disc album that also included their fourth studio album Grains of Sand, as well as various outtakes.

Listen to The Mission’s ‘Deliverance‘ as heard on Titans last night on their album Carved in Sand, and in a superb live performance the band gave of the track in Cologne in 2008 down below.

Titans itself used some amazing last century rock tracks on its soundtrack last night, including music from The Cure, The Cramps and Public Image Ltd.