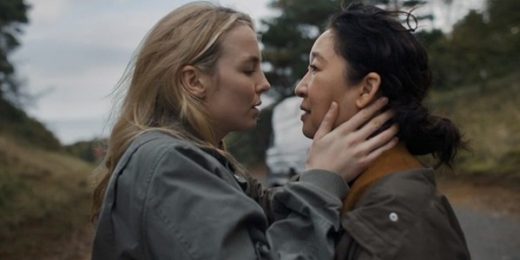 The indie pop duo The Mistys’ ‘Bite Marks‘ was that song playing on last night’s series finale of the BBC spy drama Killing Eve as Villanelle and Eve are on the country road, turn to each other and begin to frantically kiss — Killing Eve, Season 4, Episode 8, “Hello, Losers“.

Yes, it took four seasons, but we finally got that scene we have been waiting for all along, and The Mistys’ dreamy and quite mesmerizing ‘Bite Marks‘ was the perfect track to illustrate it.


Especially with these lyrics:

Listen to The Mistys’ ‘Bite Marks‘ in the video and on the duo’s 2018 album Pregnant Mannequin, which came out in 2018.

The Mistys, by the way, is Andrew and Beth Roberts. They describe the music they create as ‘Recombinant Mutant Pop‘.

I don’t know about that, but I would call this one, at least, beautiful.