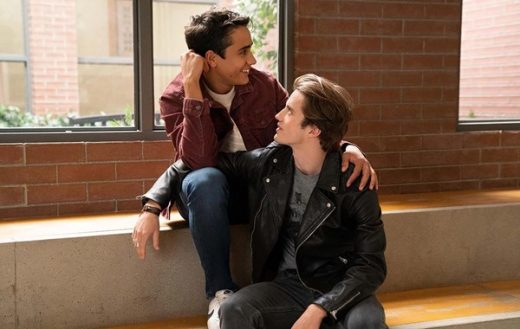 The third season of the teen comedy drama Love, Victor premiered this week on Hulu and, along with the usual interesting gay-themed storylines, we were also treated to more superb songs on its soundtrack.

Songs like Australian indie rock group The Paper Kites’ ‘Electric Indigo‘, which showed up on Love, Victor, Season 3, Episode 1, “It’s You” as Victor and Benji go for a drive.


The Paper Kites’ ‘Electric Indigo‘ was the lead single from the band’s second studio album Twelvefour, which came out in mid-2015 via the Sony Music and Nettwerk labels.

The album was a hit in Australia — making it to #1 ARIA Australian Artist Albums chart, but was pretty much ignored everywhere else.

A shame as there are several other songs on Twelvefour that are just as lovely as ‘Electric Indigo‘.

RELATED: The Paper Kites’ ‘Bloom‘ was that cool song playing on 9-1-1

The official music video for the mellow track features a man who doesn’t like to dance going to a night club called Dance or Go. When told to either ‘dance or go’ by the club’s bouncer, he leaves, even though the woman he knows at the club asks him to stay.

But, once outside, he tries to go back inside only to be told by the bouncer there is “no admittance after midnight”, but then is able to sneak back in after the bouncer tries to break up a fight.

The rest of the video is the man dancing with the woman he likes, then both of them leaving the club as the bouncer tries to find him.

Listen to The Paper Kites’ ‘Electric Indigo‘ as heard in Love, Victor in that music video, and on the band’s Twelvefour album.