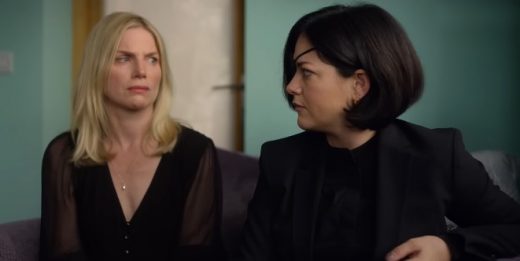 When I was a DJ at an alternative radio station in Ohio, one of the bands constantly on my Heavy Rotation list was the Anglo-Irish punk band The Pogues.

A band known for their raucous music and their equally raucous, and often drunk, lead singer Shane MacGowan. Something I absolutely loved.


But, unfortunately, also a singer who eventually left the band and was replaced by The Clash’s Joe Strummer after his drinking problems got in the way of his singing.

So, as you can imagine, I was thrilled to hear The Pogues’ ‘Dirty Old Town‘ played on Bad Sisters last night — Bad Sisters, Season 1, Episode 4, “Baby Becka“.

A song that was played as Becka is arriving at the pub, and one easily recognizable from that gorgeous harmonica intro.

The Pogues’ ‘Dirty Old Town‘ is a cover of the original song released by Ewan MacColl, and then The Dubliners, and was the third single released from their second album Rum, Sodomy and the Lash in 1985.

The song was originally written about Salford, Lancashire and, became so popular, it has since become the song played at Salford FC football games.

The version recorded by The Pogues also has a music video featuring the band beautifully performing the track.

Listen to The Pogues’ ‘Dirty Old Town‘ as heard on this week’s Bad Sisters in the song’s music video, and on the band’s album Rum, Sodomy and the Lash.

And, if you love The Pogues’ sound, don’t miss listening to The Pogues’ Fairytale of New York‘ — in my mind, the best Christmas song ever written.