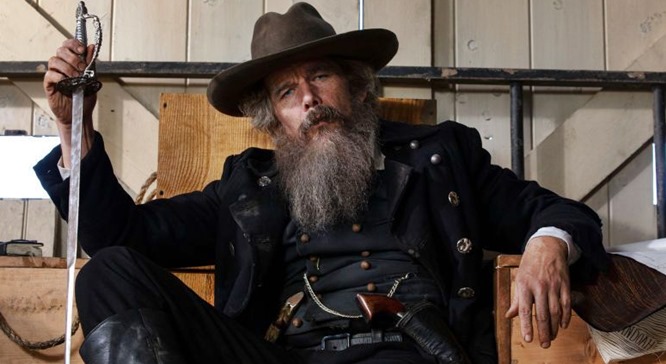 The track was heard as the deal is made with The Rail Man (Orlando Jones) to spread the word to blacks about John Brown’s plan for enslaved blacks to fight for their freedom.

The Ragged Jubilee’s ‘In The Valley II‘ is from the San Luis Obispo-based band’s self-released 2012 studio album In The Valley.

The short track is a traditional-sounding spiritual song that, in a way, was a perfectly ironic choice for that scene, considering it would be John Brown that would save enslaved black’s souls, and not Jesus as the song says.

Making abolitionist Brown himself somewhat of a God figure, some might say. (article cont. below…)

Listen to Taj Mahal’s ‘She Caught the Katy’ from The Good Lord Bird, Season 1, Ep. 4, “Smells Like Bear”

The Good Lord Bird is based on the best-selling novel by James McBride, and tells the story of John Brown, an abolitionist who said violence was the only way for slaves to ever become free.

The events of the book are seen through the eyes of Onion (aka Henry Shackleford), an enslaved black boy who is part of John Brown’s militia of abolitionist soldiers.

Listen to The Ragged Jubilee’s ‘In The Valley II’ from The Good Lord Bird in both the video and Spotify widget below.

You can also hear The Ragged Jubilee’s full album In The Valley down there too. You’ll also find more information about other songs from the series on Leo Sigh here.