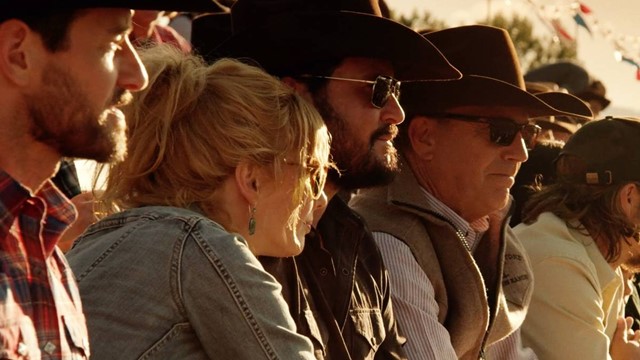 The track was that rocking song heard at the rodeo arena.

Whiskey Myers ‘Gasoline‘ is the lead single from the band’s self-titled fifth studio album. Released in late 2019 via the Wiggy Thumb Records label, the 14-track album debuted at the top of the Billboard Top Country Albums chart.

It also made it to the top spot on the Independent Albums chart and at #2 on the Top Rock Albums chart.

Part of that success, of course, could be due to Whiskey Myers being a favorite of the Yellowstone Music Supervisor, having had songs featured in four other episodes of the hit show back in 2018.

Whiskey Myers ‘Gasoline‘ is about the importance of keeping going even when everything in life seems to be going to hell. Even if you have to burn everything down first so you can start again.

The song also came with a cinematic music video that starts with a man walking into his house, grabbing a beer and watching the evening news. News that is nothing but dark, depressing and indicative of a world trying to screw over anyone who isn’t part of the elite.

Soon he falls asleep and wakes up in the desert, right in the middle of all those bad news stories. He wakes up after he strikes a match so he can burn it all down.

Listen to Whiskey Myers ‘Gasoline‘ from Yellowstone in both that official music video and on their excellent self-titled album below.