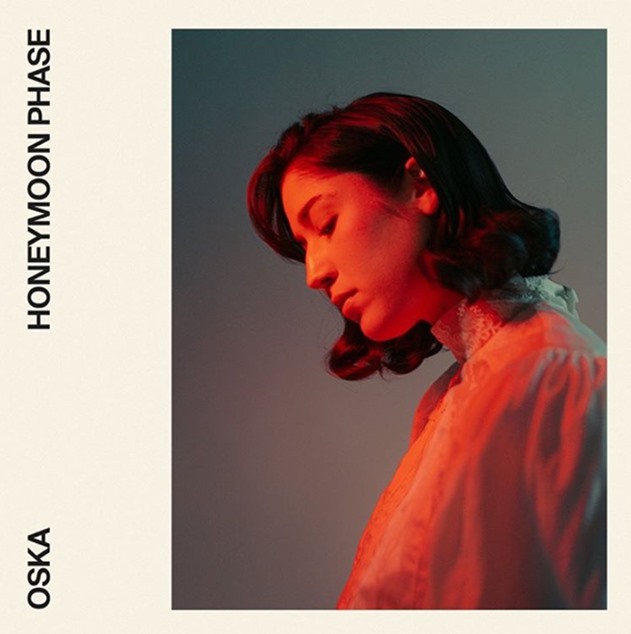 Vienna-based singer songwriter OSKA is one of those artists that pops up in strange places, releases something amazing and then disappears again.

At least that’s what it seems to me after I came across her four years ago, under her real name Maria Burger, playing guitar and providing backing vocals for fellow-Austrian Conchita Wurst’s first self-penned song ‘Blue Bloom‘.

I didn’t hear anything else about her until two years later when I stopped dead in my tracks at Vienna’s Westbahnhof railway station as a woman’s gorgeous voice echoed around the station.

A woman who was busking under a program the public transportation company, Wiener Linien, was running to help promote a small number of local artists they felt were special.

The voice turned out to belong Maria Burger (OSKA), who I must admit I did not recognize until I walked up to her after she stopped singing and read her name plate.

It was then she told me she would soon be releasing an EP and to watch out for her. Then…she disappeared again.

Finally, in this last few months, this talented Austrian singer has started releasing both new music and some pretty stunning videos to go with those songs.

One — ‘Distant Universe‘ — was picked out by Austrian music journalist Peter Schreiber as one of the videos and songs he felt stood far above so much other local indie music out there.

Now her latest single is OSKA’s ‘Honeymoon Phase‘, the title track from her upcoming EP. And, yes, like everything she does, it is worth the wait.

Because OSKA’s voice is one of those voices you hear for the first time and never forget it.

In it is all those hopes you had as a child but then left by the wayside as others told you what you wanted was not possible.

In it is the sadness of loving that person who was so obviously wrong for you from the first moment they made your heart skip.

In it is the heart-tearing truth the one you trusted was not the one that should have been given that gift.

It is the voice that accompanies you on that path to something better, while still expressing the pain of everything you lost along the way.

And if the release of her latest gorgeous single on Spotify wasn’t enough, OSKA’s ‘Honeymoon Phase‘ currently has a secret, hidden live video I stumbled across in a roundabout sort of way while doing a search for her name.

A live video that is so fucking beautiful, nothing that lovely should be hidden.

So I am embedding it here and I’ll deal with the consequences later.

When you listen to it though, don’t just listen to OSKA’s bloody lovely voice, but also to those perfect lyrics:

“The golden hours
The sun kissed your perfect mouth
Wish it could be enough
To forget the rest of us
And faking my laughter, so now I chase after the memory
Show me happy please”

Because God, she writes lyrics that are just as stunning as her voice.

OSKA’s music is being released by Nettwerk

And if being able to listen to this gorgeous music isn’t enough, I was also thrilled to see OSKA has just been signed by Nettwerk.

A Canadian music label that not only stands behind their musicians while promoting the hell out of them in the right way, but really seems to care about them and their songs.

Nettwerk is also the home of such incredible artists like Passenger, SYML and Aisha Badru.

Come on, if you were OSKA, wouldn’t you just be beside yourself right now to see your photo literally right next to Passenger’s?

Because, hell, I know I would.

Then again, if you are looking for an Austrian musician who is likely to break out of the vacuum so many talented Austrian artists get stuck in and actually make an international name for herself, my money would be on OSKA above almost anyone else.

She is that damned talented.

And once you have done that, also watch OSKA’s music video for her last release ‘Somebody‘ below that. It is just as lovely.