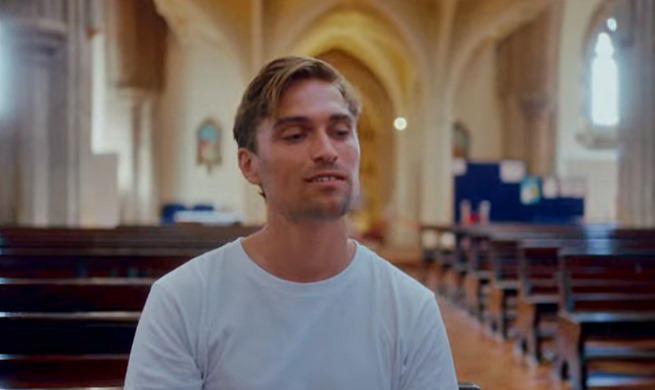 Rhys Lewis ‘The Middle‘ is the latest release from the British singer-songwriter and multi-instrumentalist and, not only is his new single a lovely little thing, it also comes with a beautiful video featuring Lewis performing the song in an empty church. Accompanied by just a piano.

Lewis’ ‘The Middle‘ is the latest single from the singer’s upcoming 13-track sophomore album.


An album that is his first full-length recording since his debut album back in July, 2020.

Called Corner of the Sky, it is due to be released in January, 2023 via Decca Records, with ‘The Middle‘ already being preceeded by four other singles from it — ‘Midnight’, ‘Simple’, ‘Happy Fucking Birthday’ and ‘Alone’.

Rhys Lewis‘ ‘The Middle‘ is another song about a break up.

Something he write about often, as he seems to find it much more difficult to walk away from relationships than the woman he breaks up with, as his emotions struggle to let go.

According to Lewis, he wrote ‘The Middle‘ after experiencing a break up that affected him much more than it did the woman he broke up with.

“We both coped with it very differently. It seemed to hit me harder and I had a tougher time moving on. When we met up again months later, I was still hoping we might get back together, but during our conversation she told me she’d met someone new.”

He went on to say he tried to be happy for her, but he still found it difficult to do as he had been hoping they would eventually get back together.

Listen to Rhys Lewis’ ‘The Middle‘ in his just-released music video below, and on the Spotify player.

It is a sweet, sad, touching song that many of us can relate to.

After all, even if you are the one initiating the breakup, it often doesn’t go as you expect it to, and the feelings for that person you thought you had lost sometimes surprise you when they refuse to let go. Especially when they find it easier to move on, and you are the one left behind.

Because “love never breaks down the middle”, eh?

You can also pre-order his Corner of the Sky album in all its formats now, and grab tickets for his upcoming tour supporting his new album here.

RELATED: Listen to Rhys Lewis’ ‘Better Than Today‘ as heard on All American