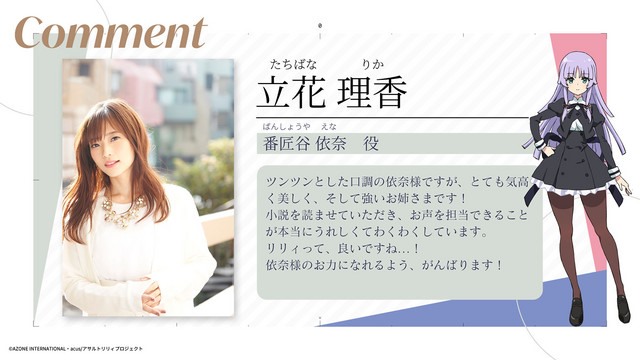 Tachibana will be playing the character of Ena Banshoya, one of the commanders of the Legion Corps.

Up until now, the 33-year-old voice actress is best known for her voicing of Kiruya Momochi in Princess Connect! Re: Dive and Aoi Asada in Hachigatsu no Shinderera Nain (Cinderella Nine).

Now she will join a slew of other talented actresses in the Assault Lily Bouquet sound booth.

Assault Lily Bouquet is being directed by Shôji Saeki (He Is My Master) with character design by Mieko Hosoi (Shōwa Genroku Rakugo Shinjū) and music by Akito Matsuda (Grimoire of Zero). It is being animated by Studio Shaft (March Comes in Like a Lion).

The series is based on two light novels by Kasama Hiroyuki as well as several popular toy figurines.

The Assault Lily Bouquet anime series was originally scheduled for release this month, but was delayed earlier in the year due to COVID-19.  It is now slated to release sometime in October.

Watch the Assault Lily Bouquet trailer below, and keep up with the latest news on the anime series’ official website.