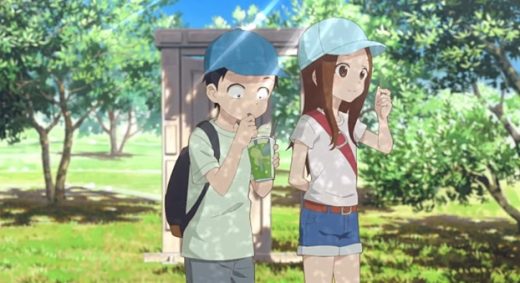 The Teasing Master Takagi-san 3 opening theme song — ‘Massugu‘ by Yuiko Oohara — is one of those anime songs that creeps on you.

Initially just a song sung by a girl with an extremely childlike-voice, and one that at first seemed a bit annoying, I quickly found myself humming ‘Massugu‘ long after the anime had ended.

Because Yuiko Oohara’s ‘Massugu‘ is so darned sweet, and has such an upbeat happy feel to it, it illustrates perfectly the way Nishikita feels about Takagi.

Even if she doesn’t tell him that.

Especially when you understand some of the lyrics:

I was looking straight at you long before our eyes met
I wish my thoughts arrived
Every time I exchange words, every time I know more about you
My feelings are unwavering

Filmed in Tonosho, Shodoshima, which is where the anime takes place, you should even recognize some of the places in it.

And then you can become as obsessed with ‘Massugu‘ as I apparently now am.