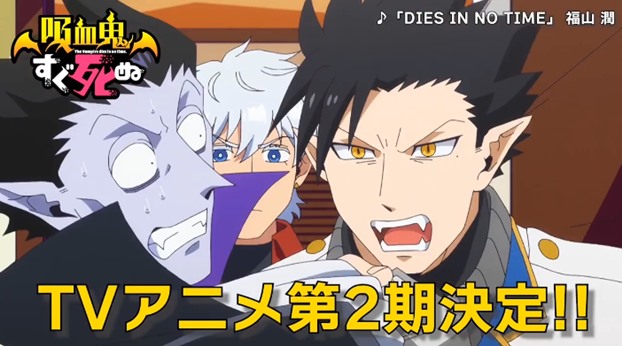 Director Hiroshi Kojina, screenwriter Yukie Sugawara and character designer Mayuko Nakano will all be back for the second season of the supernatural comedy, and Madhouse will continue to animate this utterly silly and quite funny anime series.

A short teaser trailer was also released on the anime’s official Twitter account (see below) to promote the upcoming new season.

The Vampire Dies In No Time (aka Kyuuketsuki Sugu Shinu in Japan) is based on the manga series by Itaru Bonnoki, which has been published in Weekly Shonen Champion since 2015.

Vampire hunter Ronaldo’s new job is to break into a mansion owned by Draluc — a vampire who is said to be invincible. He must do this as Draluc has kidnapped a child.

When he eventually gets into the mansion, however,  and Draluc quickly dies and the kid turns out to be obnoxious and not ‘kidnapped’ at all, Ronaldo quickly realizes Draluc is the weakest vampire around.

Lucky then that, as soon as he dies, he regenerates.

Funimation is currently streaming the first season of the anime. No date has yet been announced for the premiere of Season 2.