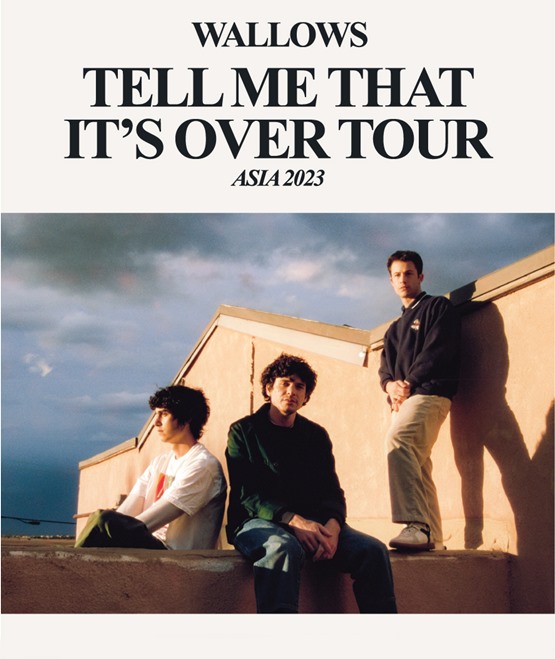 Los Angeles-based alternative rock band Wallows has announced a Tell Me That It’s Over Asia tour in 2023 that will kick off in the Philippines, head to Singapore and Thailand, followed by a concert in Korea, with the band wrapping up their five-concert Asia tour in Japan.

With two dates in Hawaii added on to the end, that means Wallows will be pretty busy for most of February, 2023.

Tickets are available for most Asian shows starting on various days this week, with the Phillipines concert already available via TicketNet, the Singapore performance via BookMyShow, and the Bangkok, Thailand concert’s tickets on sale now via TicketMelon.


South Korea’s go on sale from November 15th via YES24, while tickets for the Tokyo, Japan concert at The Garden Hall will go on sale on November 21st.

Their concerts’ track list will revolve largely around the three-piece American indie band’s 10-track second studio album Tell Me That It’s Over, which came out in March this year via the Atlantic record label.

Wallows has been heavily promoting the album for much of the year via an American concert tour that kicked off on April 1st in Seattle.

They plan to tour throughout the rest of 2022 and into 2023, with their Tell Me That It’s Over Asia Tour 2023 bringing their tour to an end.

The full dates for Wallows’ Asia tour 2023 look like this:

Listen to Wallows’ sophomore album Tell Me That It’s Over below, and you can hear what you can expect — music that is much more experimental than their previous releases, sounding upbeat whhile the lyrics say otherwise, and most of it with a lovely dreamy feel.