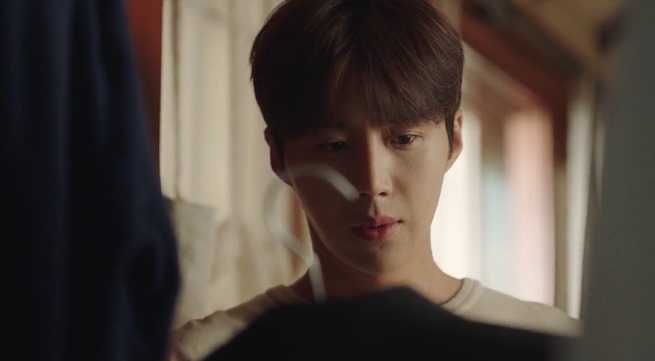 Just about my absolute favorite series of 2021 is the Korean comedy drama Hometown Cha Cha Cha, with its quirky, funny and wonderful characters, its touching story, gorgeous pair of protagonists (played by Kim Seon-ho and Shin min-a), and beautiful soundtrack.

One of the Korean series’ prettiest pieces of music is the music playing at the beginning of Hometown Cha Cha Cha Episode 2 during the montage in which we see Yeo Hwa-jung looking at her divorce notice, Jo Nam-sook playing with her deceased daughter’s fairy wand, former singer Oh Yoon thinking about his second so far un-released album, Chief Hong staring at a dark suit in his closet, and Yoon Hye-jin looking out of the window of her new dental clinic.


All our soon-to-become favorite people thinking about the sad things in their lives.

That gorgeous piece of piano music is called ‘Star above the sea’ by Lim Seung Beom, and is such a beautiful piece I played those scenes again and again just to listen to it.

That, of course, was before I realized the Hometown Cha Cha Cha soundtrack was available on Spotify, and that Lim Seung Beom’s ‘Star above the sea‘ was included on it.

And yes, that piece does reappear during other episodes of Hometown Cha Cha Cha, most notably when Chief Hong is looking at the photo hidden in the book in Episode 6 and crying, but Episode 2 is its first appearance, and is such a lovely accompaniment to quite poignant and sad scenes.

Listen to ‘Star above the sea‘ by Lim Seung Beom on the43-track Hometown Cha Cha Cha soundtrack below.

A track that is just so darned pretty, I will bet you cannot just hear it once.