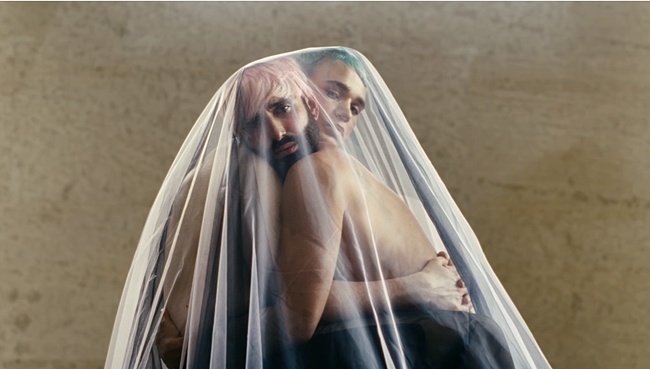 I watched the premiere of WURST and Lou Asril’s ‘Lovemachine‘ on the Amadeus Austrian Music Awards last night, and honestly left it thinking “Meh”.

I loved that WURST (Tom Neuwirth) had a big grin on his face halfway through the performance, (love when that boy’s happy!) but the choreography, and specifically the song, did nothing for me.

I do try to reserve judgment until I’ve seen all the pieces, however, and knowing WURST and Lou Asril’s ‘Lovemachine’ was getting a music video this morning — and the photos from the video shoot were stunning — Markus Morianz, I’m looking at you — I kept an open mind until then.

Well lordy, lordy, lordy and thank f*ck I did, because WURST and Lou Asril’s ‘Lovemachine‘ is a damned earworm and the bloody thing has now buried its way into my skull. 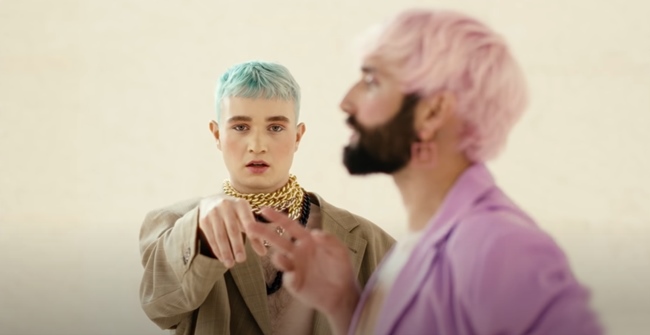 Apparently, I missed that part of the 1970s, as I have zero recollection of ever hearing ‘Lovemachine‘ before.

According to my minimal research though, the song is a Supermax hit released in 1977 that did particularly well in Germany, Switzerland and Austria.

Makes sense — because why do I have visions of a teenage Tom Neuwirth dancing around his apartment in his underwear with a hairbrush for a mic years later, determined to release it himself one day?

When he became famous, of course.

Because, come on, ‘Lovemachine‘ is a gay anthem if I’ve ever heard one.

And there you go, now he did! 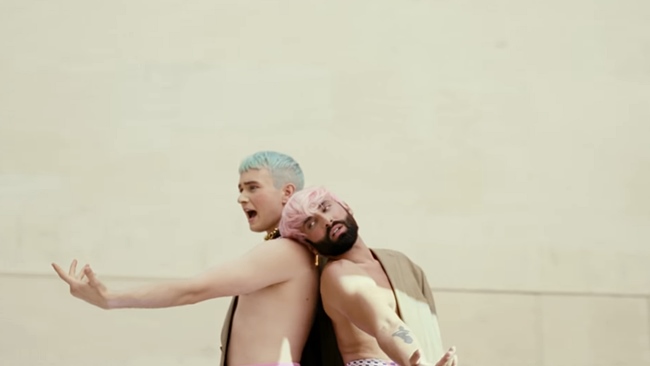 He is also quite beautiful to look at himself.

WURST (Tom Neuwirth) is always the standout when it comes to both vocals and the ability to draw your eye.

As, just like Marilyn Monroe, WURST has the ability to grab your attention in every shot, every video and on every stage he appears on with that undefinable ‘charisma’ that you can never explain but, damn, you know it when you see it.

Interestingly, however, Asril more than holds his own here.

His vocals are solid — at 0:32 in the video “If you need, if you need a one day lover” is so husky, velvety and smooth, that needs to be my ringtone — and, he is so pretty, he almost grabs the camera from WURST in a couple of shots.

Not quite but, then again, few people can.

WURST hits the song’s ridiculously powerful scream of a high note brilliantly (2:44 sitting on the steps, head thrown back). A note he couldn’t have hit with such confidence during his Eurovision days.

Six years of training and crazy hard work though, and that kind of note for WURST is now effortless.

The pair also harmonize quite well together.

And again, as the camera swirls and dips and slides, it is WURST your eye first lands upon as,with every movement of those beautifully veined hands, every tilt of his head, his eyes gazing steadily into the camera, you can feel his very soul.

As for the track’s arrangement and production, Edo Mjusik, who I honestly thought when he first surfaced as one of WURST’s entourage was “fine” but nothing special, has since developed into a helluva (n) artist in his own right.

The song itself is an aforementioned earworm. A song a fellow music journalist told me I would be raving about on Instagram this morning, just as fast as I told him “I hate it”.

Peter Schreiber, get out of my goddamn head!! 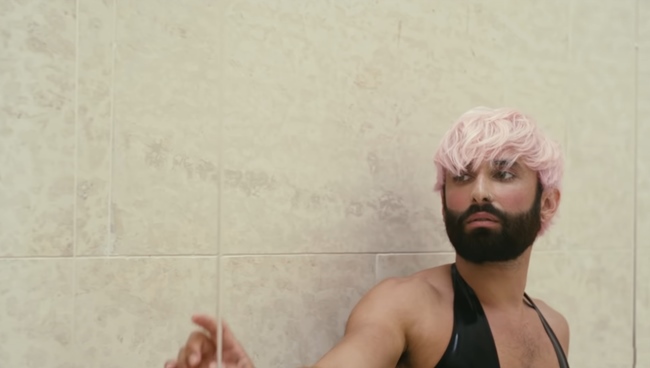 The colors — subtle and elegant — are perfect for Vienna’s Leopold Museum, where it was filmed. (Lee Niederkofler — the color grading is perfect).

And good God, the hair styles!!

Because don’t you want Tom Neuwirth in pink hair all the time? And doesn’t the blue bring out Asril’s sweet face?  (Martin Zerza, thank GOD you took over from that dreadful hairdresser with the world’s worst aura Tom used to use!! Because, Dude, your styles are gorgeous, and because you love Tom so much, you always go 1,000% beyond what you think you can do).

Now we need to just get you as famous singer-wise as Tom, as your vocals are damn fine as well!

The styling in WURST’s ‘Lovemachine‘ video (Julia Philippitsch, your turn to warrant my attention) is also phenomenal, particularly as several pieces used in past Tom Neuwirth projects are repurposed beautifully here.

And because it is all done in a way to oh so slightly shock (chain mask, anyone?) but only in that Austrian way of “we do have kink, but we tend to cover it with layers and layers of refinement and grace. That way you can’t really guess what’s going on underneath”.

As a whole though, this thing is a work of art on a par with anything the Leopold Museum will ever hang.

Risqué but elegant, shot after shot of WURST and Lou Asril are stunningly framed, (director Rupert Höller — yep, you nailed it) — with almost every frame of the video so beautiful, they could hang in an art gallery themselves.

And it is all filmed with a sense of “some people might think two men suggestively circling each other before going in for the sexual kill is offensive, but we’re here to show how sweet and lovely and downright normal it is” — and then it all ends as the fun kicks in with that delightful laugh.

Watch WURST and Lou Asril’s ‘Lovemachine‘ in that gorgeous official music video below.

The song is another damned earworm from WURST I wouldn’t have given the time of day last night, and now I can’t get enough of.