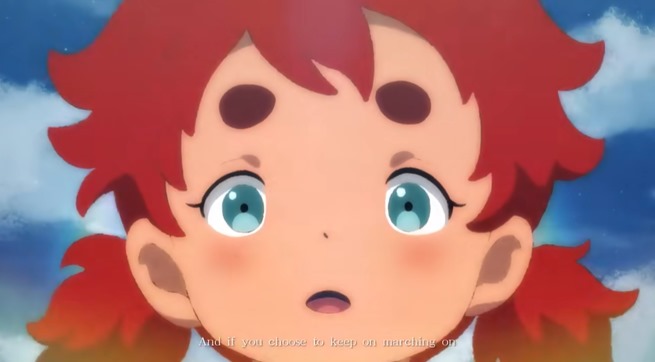 It is always a good day when we get a new YOASOBI song, and today is that day as YOASOBI’s ‘The Blessing‘, ie: the Mobile Suit Gundam: The Witch from Mercury opening theme song, has been released.

But this time the release is a little different, in that it is YOASOBI’s ‘The Blessing‘ English version that is now gracing my YouTube screen. A version that follows on from the original Japanese song that was released a month ago.


Along with that release, we also got an animated ‘The Blessing‘ music video featuring the track’s English lyrics.

A video I didn’t like when it was released a month ago to illustrate the Japanese song, as it is one of those artsy-fartsy hazy and blurry things that makes my eyes hurt.

And no, it isn’t any better, even when accompanied by YOASOBI’s phenomenal English song. (You may like it. It’s just not for me).

YOASOBI’s ‘The Blessing‘ English version though is an extremely cool thing.

What with lyrics like “Not to be part of those images someone paints/Not advancing in that show, chosen by someone else/ You and I, ally to write our story/Will never let you be lone and be gone from your side“.

Plus, the track itself is so fast-paced and upbeat, and lead singer Ikura’s vocals are, as usual, stellar, it is yet another YOASOBI track that makes you want to get your dance on.

YOASOBI’s ‘The Blessing‘, of course, is just one of a slew of English version songs the popular Japanese pop duo has released in the last few years. As, unlike some other Japanese artists, they seem to realize their international fan base is only growing, and much of that fan base loves songs in English.

No wonder they continue to be so successful, eh?

The track is also one of several more that will be released on November 18th when the duo’s latest EP E-Side 2, featuring all English language songs, is due to drop.

Meanwhile, the Japanese version of ‘The Blessing‘ is now gracing the opening of the new anime series Mobile Suit Gundam: The Witch from Mercury.

The new mecha series itself is currently streaming via Crunchyroll.

Now watch the just-released YOASOBI’s ‘The Blessing‘ English version music video, enjoy that exciting song, and see if you dislike its hazy art style as much as I do.