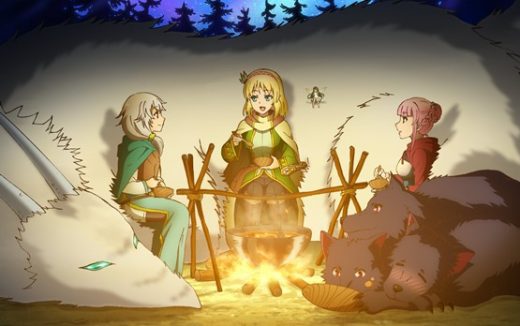 The fifth In the Land of Leadale key visual has been released today.

This one is a little comfier than some of the others, as it shows protagonist High Elf Cayna, adventurer Lonti and a friend sitting around a campfire enjoying a hearty stew.


While not the best isekai you will ever watch, if you enjoy a relatively relaxed, quite sweet in places anime with interesting characters and slapstick comedy, an episode of In the Land of Leadale will more than keep you entertained for 20 minutes.

Especially because protagonist Cayna, while looking all the world like a total pushover is anything but.

There are currently three episodes of the isekai anime out and, while fans don’t seem to be putting it at the head of their list of ‘must-sees’, enough people like it that it’s getting decent reviews.

Related: In the Land of Leadale ending theme gets sweet music video — watch!

In the Land of Leadale (known as Leadale no Daichi nite in Japan) is based on the light novel series by Ceez, with illustrations by Tenmaso.

Yen Press publishes the English language version, with four volumes out so far and the fifth one due in April.

The anime is directed by Yuuji Yanase (If it’s for My Daughter, I’d Even Defeat a Demon Lord), with series composition and script by Kazuyuki Fudeyasu (Black Clover).

The In the Land of Leadale plot

In the Land of Leadale tells the story of Keina who has spent much of her life on life support after a terrible accident, only for there to be a power cut at the hospital and for her to die.

But, instead of her life being over, Keina wakes up as Cayna, a High Elf she used to play in a VRMMORPG called Leadale.

But this Leadale is different from the one she remembers.

After all, it is now 200 years in the future, and it looks like this is no longer a game but real life populated by NPCs, including the three children Keina, now Cayna, once created in-game.

Enjoy the just released fifth In the Land of Leadale key visual above, and watch the official trailer for the anime below.

Like I said, looking for a comfy show? This one is sweet.

You can watch it on Crunchyroll.