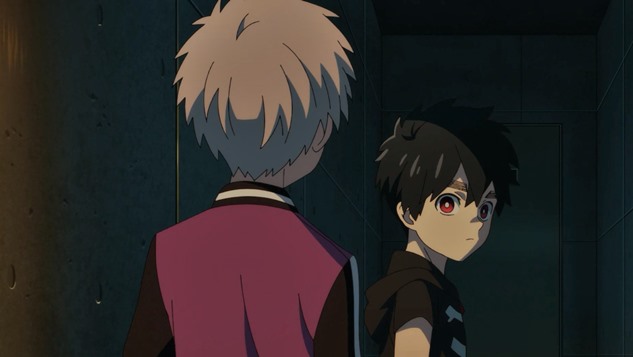 In fact, with two episodes of the supernatural series now under my belt, I can confidently say this series will easily become one of the best anime of 2021 for me.


As for Kemono Jihen Episode 2, “The Kemonoist“, if you thought Episode 1 was superb, you ain’t seen nothing yet. And yes, this one is even creepier than the first. 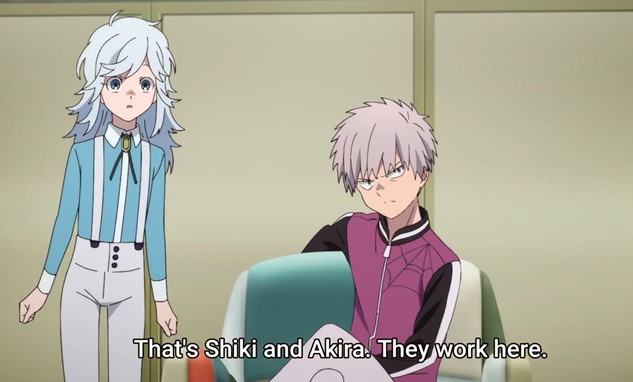 Inugami introduces Kabane to the two children we saw at the end of the first episode.

Their names are Akira and Shiki, and both are Kemono just like Kabane.

While Akira is smiling and friendly, Shiki notices Kabane is wearing his clothes as Inugami gave them to him when they arrived. Shiki becomes angry and tells Kabane to leave his clothes alone but, as Kabane tells him that he will take them off, Shiki backs down declaring he doesn’t want clothes someone else has worn.

All three then talk about their age, with Shiki being the oldest at 14 and Kabane saying he thinks he is 13-years-old. Shiki then says he will not allow Kabane to share his room and storms off, leaving Akira to be nice to the new addition to the household.

But that situation soon dissolves into a mess as well, as Kabane stares at Akira and calls her a very pretty girl. It is then we learn, while Akira is ultra-feminine and very pretty, he is in fact a boy.

Akira becomes angry at what he perceives to be an insult, and also storms off after Shiki leaving Kabane alone to dwell on what he said. 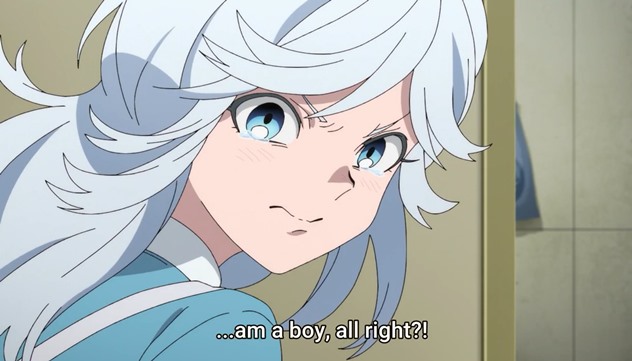 Soon afterwards, Kabane and Shiki are at a table laden with pizza. Shiki is eating but Kabane is not.

Shiki finally tells Kabane he should help himself, and then learns it is the first time the new arrival has ever eaten pizza. Shiki cannot believe it.

Eventually the household goes to bed, but Kabane needs to take a bath. Creeping along the darkened corridor, however, he trips and falls. When he looks at what he fell over, he sees his foot tangled around a thread Shiki has strewn across the corridor to act as an alarm.

Shiki tells Kabane not to get up as the thread will cut into his leg, but Kabane ignores him, gets up and pulls his foot away from the thread. As he walks away, Shiki sees the large wound on his leg beginning to quickly heal until, just seconds later, it has completely disappeared. 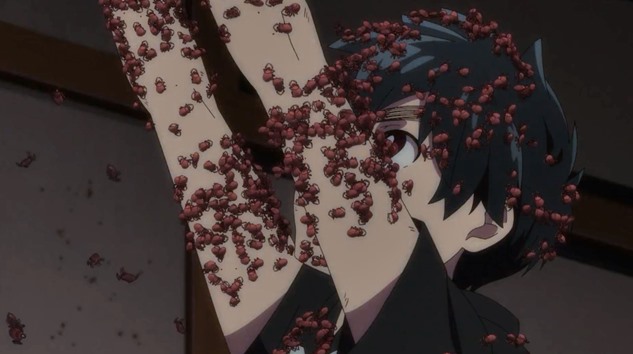 The following day, Inugami tells the children he has a job for them, and the four of them head off to a small house somewhere in the suburbs of Tokyo.

When they arrive, the house is surrounded by police. They only allow Inugami to enter once he has told them he is an investigator and has been sent for by the superintendent.

Upon entering the house with Kabane, Shiki and Akira, they are told a mother, a child and a rescuer are in a room that is now taped off. Two other children sit huddled on the floor in the first room crying and hugging each other.

When the Kemonoists peep into a crack in the door, they see the mother, her child and the rescuer covered in small insects. These are Sanshichu bugs.

Inugami explains Sanshichu are normally harmless and just eat tiny parts of your skin as you sleep.

In this situation, however, something happened that caused the bugs to swarm and, if not removed from the three people inside the room, the people will eventually be eaten alive.

Inugami says he can change his skin into steel, which may give him a 50 percent chance of survival if he goes into the room.

Meanwhile, Shiki tries to draw the bugs away from the mother and child by shooting spider webs from his fingers all around the room. His plan does not work, however, as the bugs eat through the web and head towards Shiki. Shiki screams and flings himself away from the door.

Kabane then insists he can go into the room without putting his life in danger.

Soon he is in the room covered in Sanshichu. Bugs that he wipes away from his eyes as he continues to walk forwards. Inugami then tells him to look for the thing the bugs are swarming over the most as that is what attracted them.

Kabane holds the object high up towards the light in the ceiling as directed by Inugami. All the Sanshichu immediately disappear, leaving the woman, child and the rescuer unconscious but alive.

It turns out the bugs are attracted to guilt and, as one of the boys stole a pair of shoes, that is why the bugs appeared. 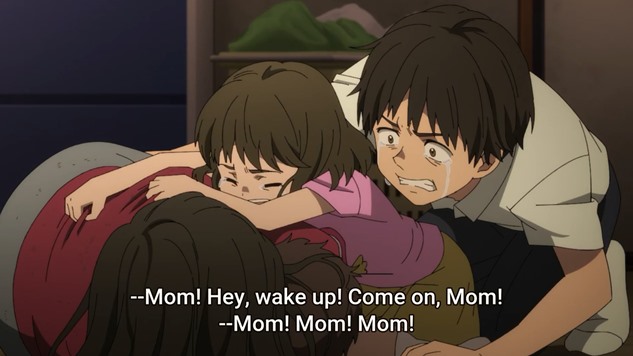 Kabane and the concept of family

The older boy then tells the four Kemonoists they are a poor family, and his mother’s only pair of shoes have holes in them, so his younger brother had stolen a pair of shoes for her to wear.

Due to his brother’s theft, and subsequent guilt when it was pointed out what he had done was wrong, the Sanshichu quickly swarmed the room. His mother threw herself over him to protect him from the swarming insects, and both of them were engulfed.

This leaves Kabane wondering about the idea of ‘family’, and how members protect each other. He then asks Inugami if he could meet his parents.

Inugami asks him for the third time if he wants to do that. This time, Kabane replies that he thinks he does. Inugami then tells the boy he can live with them at the office.

Kemono Jihen Episode 2, “The Kemonoist” ends with Inugami calling someone on the phone, telling them the job has been finished and then talking to the person about Kabane. 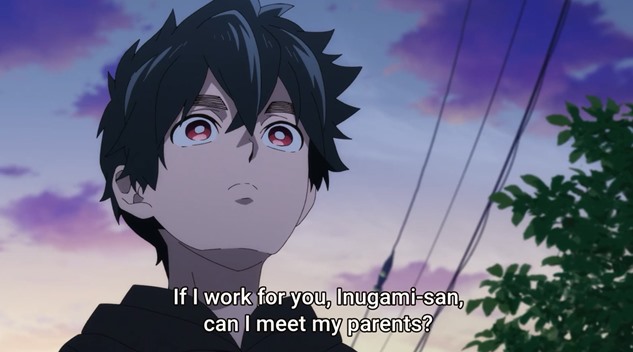 With just this second episode in the series, it is obvious the anime will attract a huge number of fans, and is likely to be a series that over time will become iconic within the anime fandom.

In Episode 2, Kabane continues to enthrall us with his calm demeanor and his ability to always do the right thing. Even if he still finds much of the world confusing. 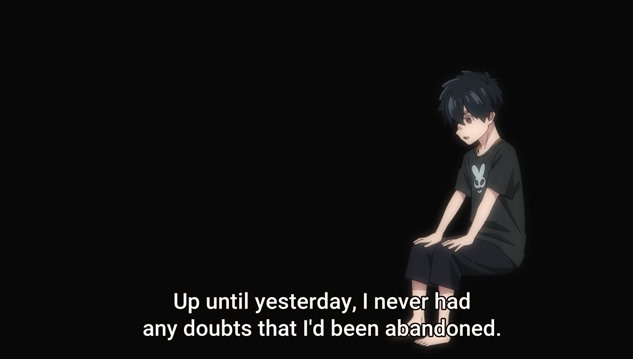 Inugami becomes more mysterious with every episode, as he not only seems to have secret friends in Tokyo, but he is also a person who can be quite devious. Even though, up to now, it seems to all be done to help complete a job and to create the best situation for the people involved in it.

Including himself and the children living with him.

Shiki and Akari are also interesting characters, as Shiki is a typical teenage boy full of bluster and bravado and, at first appearance seems to be a bully. Deep down, however, it is all a front put up to protect himself as, in reality, he is a nice person who always takes care of his friends.

There is still a lot to learn about Akari, but what we do know is he frightens easily, and anything dirty or scary terrifies him. Sometimes they even make him faint.

That the episode also ends on another cliff hanger means Episode 3 is likely to be a binge watch for many.

The opening theme song ‘Path of The Beast’ by Daisuke Ono and the closing theme song ‘－Mark－‘ by Sayaka Sasaki are also nice additions to the series.

All in all, two episodes in, and I cannot recommend this wonderful supernatural anime series enough.

Kemono Jihen is streaming on Funimation.